As I grow older, I appreciate the natural world more. I’ve also come to realise that I’m most at peace when I’m in, on or by water, or I’m surrounded by trees. Forests and waterways feature prominently in my novels – though not always in a peaceful way. Living in an area known for its trees, as well as providing many opportunities to spend time on or by water is something I’m grateful for.

There’s a lake close by which is lined with trees, and my partner and I get to walk there at least a couple of times a week. Over the last few 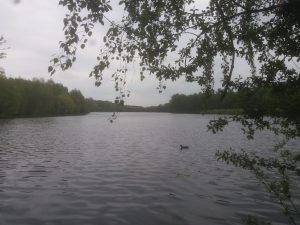 months, though, I’ve found I’m increasingly fascinated by what’s happening around us as we walk. For instance, did you know a robin can throw its voice? They used to catch us out as we searched high in the treetops for the source of the song, only to realise it was only two feet away.

The geese are our key focus at the moment, though. I’ve been sailing on that lake for years now, and not really paid a lot of attention to them in the past. But the walks have led to me taking more notice. I love the way they take off from the water, and land. If you get a chance to just settle back and watch a goose come in to land on water, it’s well worth it. Take special note of the way the wings shift a gear in the final few seconds. 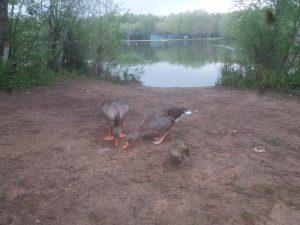 Just lately, though, we’ve had the added benefit of seeing goslings. If I remember, I take a small container of birdseed with me and, one evening last week, having dispensed a few handfuls at various points around the lake, we stopped by the jetty. Perhaps because of the slipway, or maybe because there’s about forty or fifty feet of flat, solid surface to work with, a good proportion of the ducks, geese and other waterfowl can be found here.

The goslings have only been around for 2-3 weeks, so we weren’t sure how the parents would be with us. There had been some understandable wariness – and the occasional hiss – on other visits. This time, though, once we started scattering the seed, and both parents and young tucked in, we were allowed to stay close by.

Both of us felt very privileged to share some time with them. And, I have to say, I’m finding it increasingly difficult not to want to reach out and cuddle these birds. I know they won’t like it, so I won’t. But when I think of it, I can’t help but wonder why I feel this affinity with geese. I don’t think it’s because they’re loving creatures that show affection. Dogs and cats come more readily to mind on that front. But maybe, like even the frostiest of people, given the right circumstances, you can warm to them, and them to you.