The Gigging Years: Who Would You Prefer To Watch?

It was my mum’s birthday last week, and it reminded me of a gigging story. I’ve previously made reference to the fact my mum influenced my early musical tastes. Although I went on to discover and adopt different types of music in later years, I still have a fondness for Elvis, The Stylistics, Leonard Cohen and Neil Sedaka. I don’t mean to suggest this is the full extent of her range, but I hope you can see she wasn’t too restrictive.

As it happens, in later years she broadened her interests and enjoys an even wider range of music now. I remember her coming to stop with me and my family about 15 years ago. She’d have been in her late 60s then. While she was visiting, one of my son’s friends came round. I should mention here that Bryn was possibly the coolest kid you could ever meet. Barely into secondary school, he already had a Fonz-like quality about him.

While he was at our house, someone must have put a CD on and, hearing it start, my mum looked up and asked: “Is that Greenday?” and, in the process, outcooled young Bryn, whose mouth dropped open as he stared at her in awe.

Back in 1984, though, I wasn’t willing to be quite so experimental with her. I didn’t need to be. Something dropped into my lap. Her birthday coincides with American Independence Day and I discovered Neil Diamond was going to be playing the NEC two days later. Sometimes, the world is just telling you what to do.

Much to my partner’s horror, I love Neil Diamond. I love his music and I love his voice, and I put my initial interest in him down to my mum having a Greatest Hits album of his when I was still at school. So I was interested in going to see him live anyway, and my then girlfriend was happy to come along too. I went to book tickets and everything slotted into place: third row from the front and smack in the middle. Perfect seats. The world confirmed I was doing the right thing.

When it comes to treats like this, I tend to make them surprises, so I didn’t tell my mum in advance, though I made sure she kept the night clear. I’m not sure whether I told her when I went to pick her up, or if it wasn’t until we arrived at the NEC. Either way, she was excited and chuffed to bits with the treat. I’m not sure if she’d been to any concerts in the past but, if she had, they were few and far between. When she saw how close we were to the stage, she was very excited. Things were going brilliantly.

And then the plans began to go awry. Prince Charles and Princess Diana arrived and took their seats. They were sitting on the right-hand side as you faced the stage, and about half-way back. Suddenly, my mum’s attention had switched from the stage about fifteen feet in front of us, to some seats several hundred yards away and out of the natural line of vision. 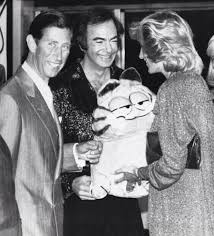 Was it a birthday treat my mum will always remember? Neil Diamond was brilliant. His first appearance was rising up through the stage – a staircase, not a lift – which surprised and delighted us. Then he went on to perform for 3 hours, taking only a short break in the middle. His catalogue of songs was already extensive even then – and he still didn’t have to resort to using songs he’d written for other artists. He used lasers to project images on the backdrop and a screen that ran overhead, the full width of the stage. They were probably most effective when he recreated some of his Jonathan Livingston Seagull soundtrack, with images of the seagull in flight adding to the effect of the music. (Remember, was 1984 – lasers weren’t in common use in those days.) Inevitably, there were plenty of songs to join in with – Sweet Caroline, Forever in Blue Jeans, Cracklin’ Rosie and so many more.

So, yes, it was memorable for my mum, and would have been simply for the performance – if she’d spent more time actually watching it. She seemed to spend as much time looking over her shoulder to see how Diana was enjoying it. At the time, I was a irritated by her distraction. After all, I’d paid good money for her to watch Neil Diamond, not give herself a crick in the neck to see someone else enjoying themselves.

But the reality is she got as much pleasure out of that as she did from seeing Neil. And she did enjoy the music as well. So, although there were moments when I began to doubt whether the world really had pointed me in the right direction, when I look back on it now, I know it had.

Diamond has so many great songs, and I’d argue that there are quite a few that are better than this one. But I defy you to watch this and not sing along…