When I was at school, most of my mates had nicknames. Zim, for example, was not the given name of my best friend. Strangely enough, Boo, El and Fathead weren’t parental choices, either. The closest I got was the mis-pronunciation of my surname – which still happens! That aside, there’s only limited scope for shortening my first name – a conscious decision by my parents, apparently.

Like many kids, as I hit my teens, my vocabulary became stunted and any response to questions were monosyllabic and barely coherent. I suspect this was the reason one of my sisters christened me “Grunt”. Not having had a nickname up to this point, far from being affronted, I took pride in this new moniker.

As it happens, the nickname didn’t really stick and, although it was referred to by my mates, I don’t recall them addressing me as “Grunt”. To this day, that sister still refers to me as “Grunty”, but no one else even acknowledges it. Frankly, being forty years older, I’m quite relieved about that, and happy to forget my misguided joy.

An exception to that arose recently when I came across an old suitcase containing T-shirts and programmes from my early concert-going days. Among them I came across these from Thin Lizzy’s Renegade tour:

This poster was a pullout from the programme, I think. 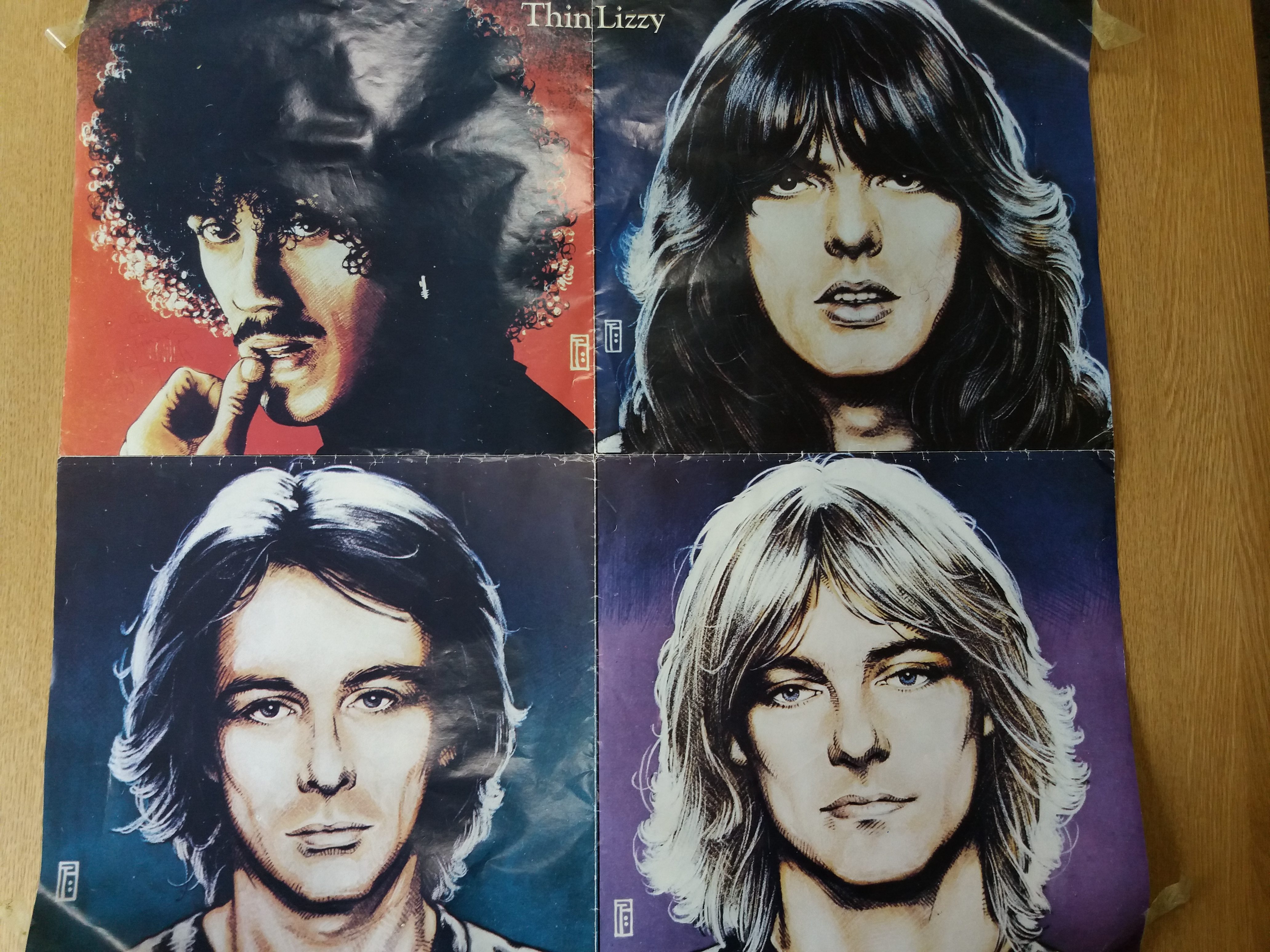 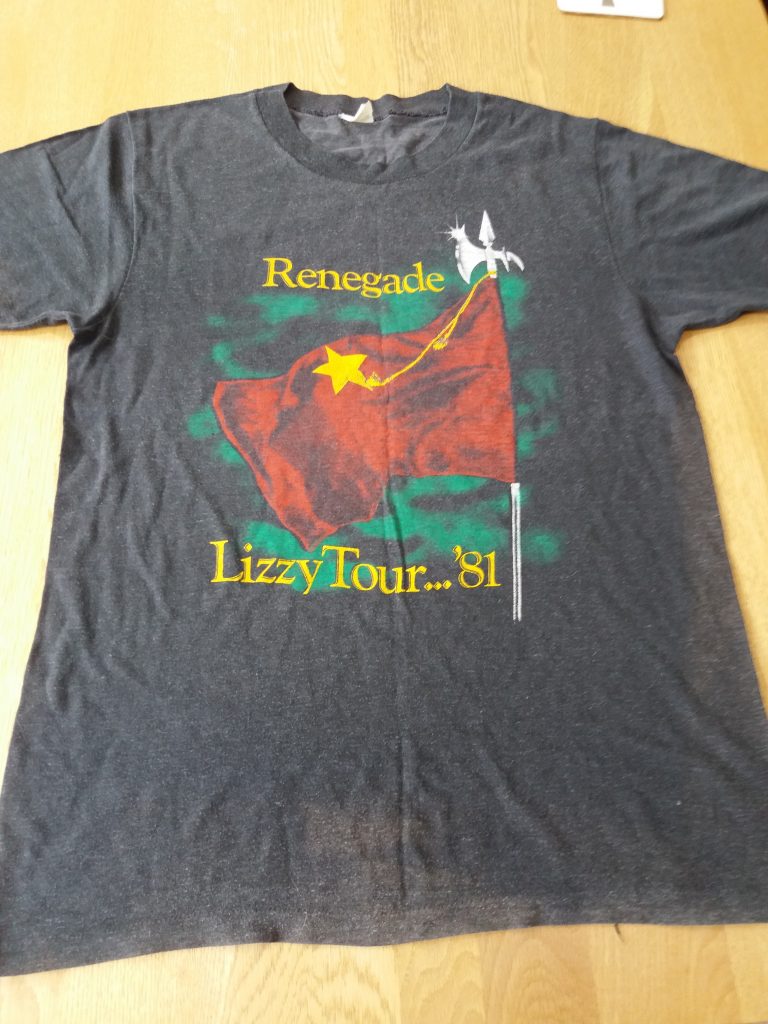 Back of same T-shirt – we saw them 14th December

I remember the gig (of course!), and I remember meeting Phil – who wouldn’t? – but I’d forgotten getting his autograph. Seeing it again, brought everything flooding back to me, and I was flooded with emotions, accompanied by the memory of a thrilling moment, tinged with sadness at the loss of a great artist.

I’ve written before about seeing Thin Lizzy live for the first time and how it affected me. If you’ve followed this series at all, you’ll know I’ve seen a lot of artists over the years, and certainly most of the acts you’d consider superstars of pop and rock. For me, none matched the impact Thin Lizzy had, and the enormous presence of Phil Lynott on stage.

Both times I saw them at De Montfort Hall, my mates and I headed backstage after the gig. The autograph was obtained the first time.

To a lad in his late teens, having been dazzled by the spectacle of the performance, life in a rock band seemed incredibly glamorous. My illusions weren’t exactly shattered by going backstage, but they were modified. I don’t think we actually got into the dressing room but, glancing in from just outside, it didn’t seem quite as luxuriant as we’d imagined. Perhaps the narrow, concrete staircase leading up there should have given us a clue, the brick walls either side painted in some municipal colour that, mercifully, has become hazy in my mind over the decades since. Even though they weren’t in the same league as, say, the Stones, Lizzy were a major rock band, and it came as a bit of a jolt to realise the facilities provided to them were, at best, functional.

And cramped. Which I suspect is why, although we were greeted warmly, we were ushered back outside. But we weren’t left alone for long. Phil and lead guitarist Scott Gorham joined us. The other band members seemed less inclined to mix with the fans.

During the show, there’d been a moment when Gorham had pointed directly at me, which gave me an irrational thrill. Even Zim came up to me, after they’d left the stage, raving about the fact I’d been pointed at. In truth, from where he was standing, the lights would probably have been in Gorham’s eyes, so he wouldn’t have been able to see who he was pointing at. I knew that. Still, even now, when I recall the moment, I feel a sense of excitement. Not that I mentioned it when I spoke to Scott. I was just in awe of the fact he was talking to me, even if it was only a few words as he signed the poster. 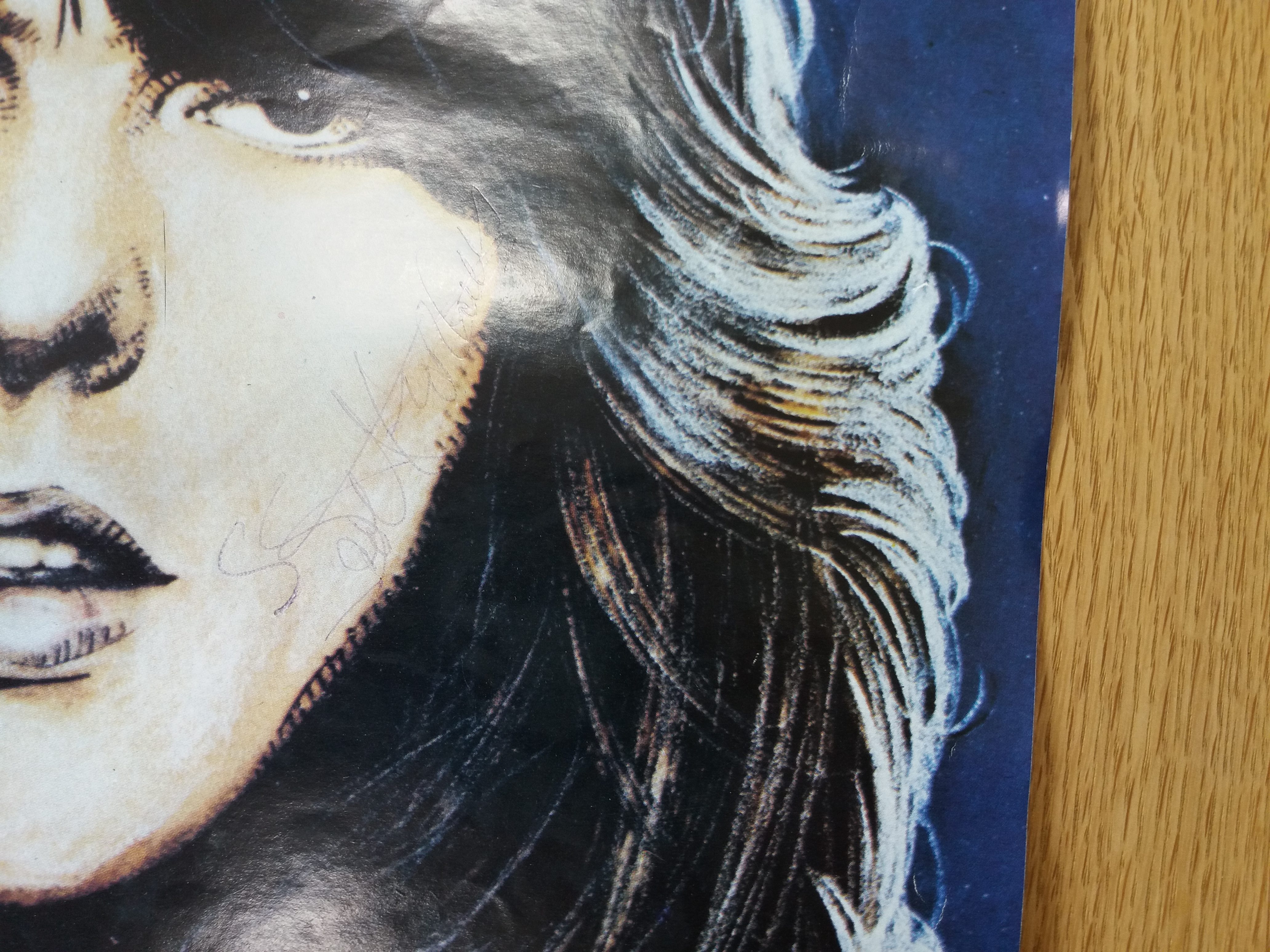 Lynott was the real revelation, though. Performing, he was a towering figure, dominating the stage, his very presence demanding your attention. Up close and out of his stage gear, he seemed quite diminutive. I’ve read somewhere that he was about six feet tall. Perhaps if you measured to the top of his afro. I don’t mean to suggest he was short but, with the wiry frame, skinny jeans and Dennis the Menace striped jumper, he seemed so different from the colossus we’d seen on stage only thirty minutes earlier.

And, far from being the aloof, Mr Cool he could have been, he was happy to laugh and joke with us, so we felt at ease in his presence. I was still star-struck, but it was good to connect, no matter how briefly, with this incredible talent – and discover he was just a bloke like everyone else.

When he came to sign my poster, he asked what I wanted him to write. He looked up from his pen as I told him. His look said it all: Seriously? But there was humour there and, whereas someone else might have made me feel ridiculous, he seemed happy to be part of the joke.

It’s faded with time, but you should just about be able to see it 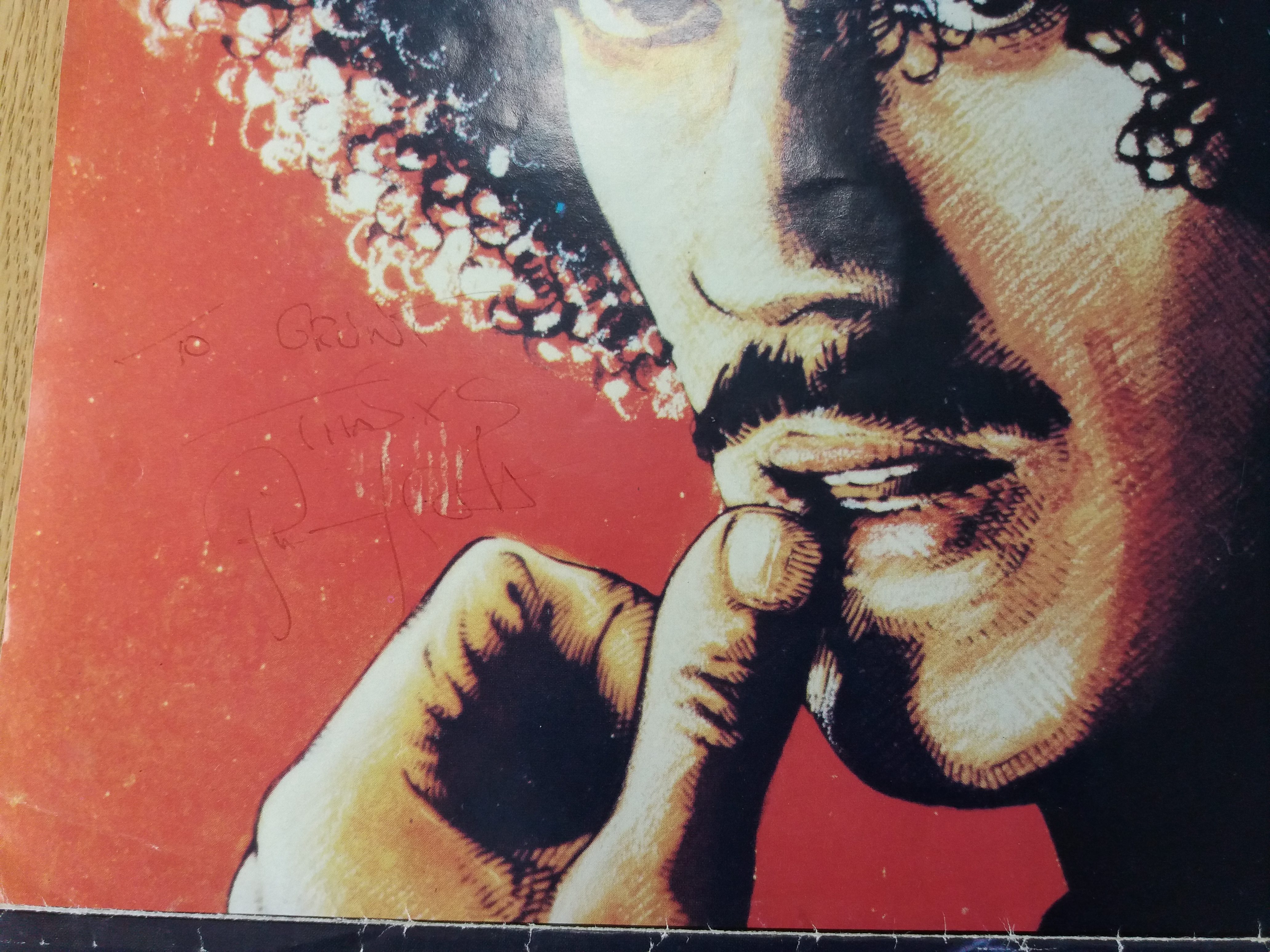 What does make me feel ridiculous is the fact I’d forgotten I had this and it’d been left folded up in a suitcase for a couple of decades. Knowing how I felt hearing the news he’d died, and how I still feel when I reflect on the loss of this great showman, it seems ludicrous that I should’ve just tucked it away. Right now, I’m pondering what to do with it. But I suspect it’ll have a more prominent place in my life from now on.

As this memory is from the Renegade tour, I wanted to end with a suitable song. In a way, this isn’t because they didn’t play it live. For me, though, this is the best song on the album, and Zim and I always said it was the best live song they never played live. No visuals to speak of, but the lyrics are a perfect example of how Lizzy were able to capture the mood of a pulp fiction story in only few words. And the guitar riffs… I’ll let them speak for themselves.