A few weeks ago, I wrote about gigs at Loughborough Students Union, but one act in particular warrants more background.

Some of the singers and bands I’ve written about have been very high profile – The Rolling Stones, Queen, The Police – and others less so. Tom 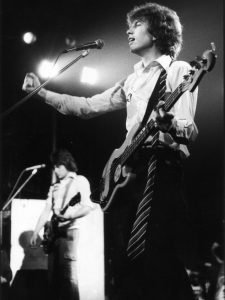 Robinson seems to slip under the radar for a lot of people. A few will remember his single War Baby from the mid-’80s, a few more might recall 2-4-6-8 Motorway from the late ’70s.

I would’ve been to see him around the time War Baby was a hit and I think I saw him at Leicester De Montfort Hall as well as at Loughborough.

Although I’d enjoyed 2-4-6-8 when I was at school, his other songs must’ve passed me by, because I wasn’t aware of the rest of his music. Something about the haunting tone to War Baby prompted me to buy the single, though, something I wasn’t prone to doing – I tended to buy albums. It also interested me enough to go and see him live.

To be honest, I probably wasn’t expecting much from him. Maybe that was what made his performance stand out.

His presence on stage is, initially at least, understated, but his warmth as a person comes across. He seemed at ease with the crowd, as if he was among friends, encouraging banter with the audience and clearly not taking himself seriously.

Highlights were inevitably the songs I knew, but there were a couple of others. I’d clearly missed Glad to be Gay being released – though I understand it was banned by the BBC, so perhaps it’s not so surprising. We’ve come a long way since the late ’70s and early ’80s and, from a personal point of view, I’ve matured as well. Although I didn’t have any issues with gay people, back then I’m sure I saw them as different and somehow ‘other’ from me. Some of that will be the social conditioning of the time, though I must’ve been guilty at least of not bothering to question that.

When Robinson began playing Glad to be Gay, it became apparent this was a sing-a-long song, and I initially felt uncomfortable joining in. I suppose it was the fact everyone else was singing that encouraged me to go with it. It’s a bit like going to a nudist beach and realising you’re the odd one out because you’ve still got your clothes on. I was 20 in 1983, and still suffering from post-teen insecurities. These days, I’d probably be more likely to lead the singing, despite being out of tune most of the time. I do think it broke down some barriers for me, though, and helped me to become not only more accepting of the LGBT community, but also of myself.

Another highlight was when, between songs, he asked if anyone in the audience had any sunglasses he could borrow. This was clearly a regular part of his performance because at least a dozen were offered immediately. Slipping a pair on, he said he was going to be Lou Reed and we, the audience, could be “The Pointer Sisters”. Then he eased into Walk on the Wild Side.

The original song breaks with “…and the coloured girls go…”, but Robinson changed it to: “… and the audience sing…”  The response, with arms in the air and forefingers jabbing upwards in time to the beat involved a lot of “doos” and “doo-doos”. It was a masterclass in connecting with the audience.

In 2002, I found out Robinson would be appearing at a small venue near my current home town. He was touring with Martyn Joseph and Steve Knightly under the title Faith, Folk and Anarchy. Recalling how good he’d been, and noting the gig fell just after my birthday, I decided to treat myself. At this stage, I was out of the habit of going to concerts, so it really was a treat.

I didn’t know anything about the other two artists, but thoroughly enjoyed the show. Most of the material was new, and they weren’t averse to singing each other’s songs, so it was interesting to see different takes on the music. Of particular note was the point at which Robinson took centre-stage and suddenly started clapping his hands and clicking his shoes flamenco style. First impressions were bizarre, and distracted me for several moments from working out there was a specific rhythm to the sounds. No instruments were playing, so there were no other clues there. He didn’t need them, because the penny dropped even before he started singing the opening line: “Drive my truck midway to the motorway station…” I suspect my mouth dropped open and remained so throughout this a cappella version of 2-4-6-8 Motorway. It was a stunning rendition, and must’ve taken a lot of balls to perform it that way.

After the gig, we retired to the bar where the trio had set up shop to sell CDs and chat to the crowd. I bought a copy of the album and still have it. And I had a brief chat with Robinson. That, in itself, was unusual for me, because I normally feel too awestruck to get any words out in those situations. I suspect it was a reflection of the man himself. Laid back, approachable, and clearly at ease. I mentioned the previous concerts, commenting on how long ago it had been. He smiled and tipped his head in a nod. “We were all a lot younger then,” he said. Yes, we were. And, it seems, even younger still as I reflect on it seventeen years later.