The Gigging Years: Or Not, In This Case

I wrote recently about going to watch Bohemian Rhapsody. The film begins and ends at Live Aid, and reproduces in full the set played there by Queen. Watching those fifteen or twenty minutes of film left me feeling very emotional. In part, it was watching this surprisingly effective reproduction of them playing live. It brought memories flooding back to me of seeing them play at Wembley, especially as they performed Radio Ga Ga. But it also reminded me of a missed opportunity. 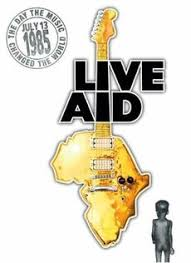 To this day, you could argue that Live Aid was the greatest concert ever staged. And you would think that, with my interest in live music, this would have been an absolute must for me. I had been to gigs at Wembley Stadium before and, whilst I didn’t especially like it, compared to a lot of outdoor venues, it was pretty good. For a start, the toilets aren’t portaloos!

The line-up for the concert was phenomenal, and included acts I hadn’t seen before, so in true trainspotter fashion, I’d have been able to tick them off my list as they came on – particularly David Bowie, The Who and Paul McCartney. 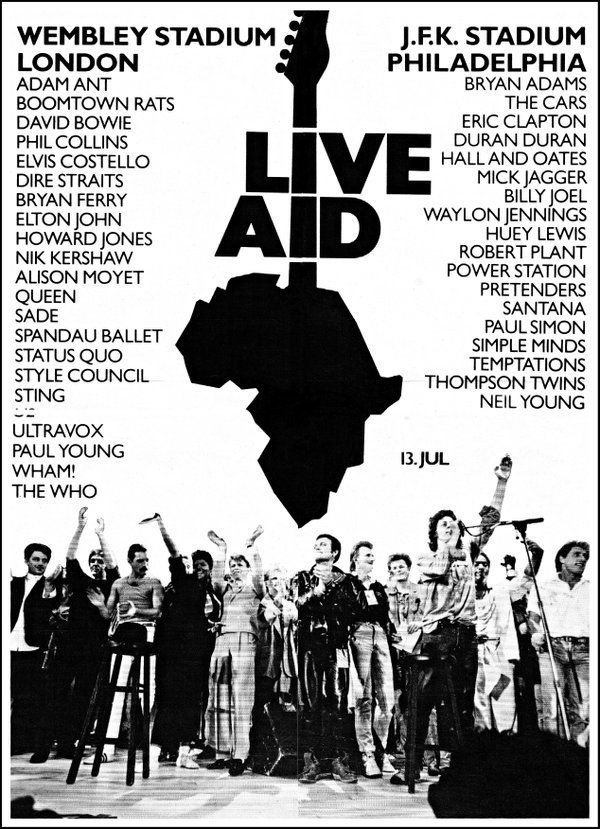 And, even though tickets sold out very rapidly, I knew I could get one if I wanted one. Zim was going, and so were a couple of other mates. If I wanted to go, it was a done deal.

There was just one problem. I didn’t agree with the purpose of the event.

That might seem pretty crass of me. How could I not agree with raising money to help alleviate the suffering of the people starving in Ethiopia?

Well, the key reason was that I’d seen efforts made before to help the starving and they’d effectively put a sticking plaster on the situation, helping temporarily, but not providing a sufficiently long-term solution to prevent it happening again. And usually the recurrence had happened fairly soon afterwards.

Overlaying that factor were my own philosophies on life. I looked at things from a big-picture point of view, and not from a human perspective. Since then, my philosophies have changed significantly and now I would argue that even saving one person’s life would have made the whole event worthwhile.

But, with the perspectives I had at the time, I felt very strongly that it was a pointless exercise. The amount of money that would need raising to make a difference seemed an impossible dream to me. So, much as I wanted to go, my principles – such as they were – meant that I couldn’t support it.

As the day approached, and my friends were getting more excited about going, I did have regular pangs. This was going to be a major event, and I was going to miss out on it. But I held fast to my beliefs and knew deep down that I was doing the right thing. My conscience, at least, would be clear.

I lived on my own at that time and didn’t have a TV. That suited me as it meant I couldn’t be tempted to watch the event when it was on, so I’ve never seen it. I am a great listener to radio, though, so it was almost inevitable that curiosity would get the better of me and I’d listen to some of it, cursing my weakness as I did so. (I don’t recall hearing Bob Geldof’s infamous “send us the fucking money” line, though.)

As we all now know, I was wrong. So wrong. Wrong in a way that suggests I should be resigned to a life of sackcloth and ashes.

But I’m glad I was wrong. Live Aid raised about 20 times more than I could have possibly imagined, and it did go on to make a huge difference in Ethiopia and elsewhere. That became clear very quickly, and I at least had the good grace to acknowledge that soon after.

Perhaps more significantly, it changed attitudes to raising money for charity. Sure, there are still charities out there who aren’t using the money donated to them in the most efficient ways they can. But these days I’d still argue that they’re at least doing something. And the recognition that celebrities in any field of entertainment can make a difference has become the norm, with Comic Relief and Sport Relief now a fixture in the UK calendar.

So, far from being an event that would prove fruitless, Live Aid’s legacy is enormous. And I missed out on going to the greatest concert ever for all the wrong reasons. I await your scorn…