The Gigging Years: Ghost in the Machine

Listening to the radio the other day, I heard Every Little Thing She Does is Magic. Not a big deal until I heard the year it was released: 1981. Was it really that long ago since I saw them?
As with a lot of gigs, this one started with a suggestion from Zim.
“Do you fancy going to see The Police?”
He’d seen them before and raved about them, so I was up for it. Nowadays, any band with a hit single seems to fill arenas, but back then the only arenas were Wembley and the National Exhibition Centre. Nevertheless, The Police weren’t likely to show up at the modest venues in Leicester or Nottingham, so I suspected we’d be travelling. What I hadn’t expected was Zim’s follow up: “We could go and see them in Germany.”
By this time, we’d begun go further afield for gigs, but actually leaving the country hadn’t even occurred to me. It seemed, though, that a coach trip had been organised for fans to make the pilgrimage to Essen. I did hesitate, but not for long.
The gig was only the second date of the world tour, and took place at the beginning of October, more or less when the Ghost in the Machine album was released. The years have dimmed my memory, but I seem to think we set off from London’s Victoria coach station the day before the gig. 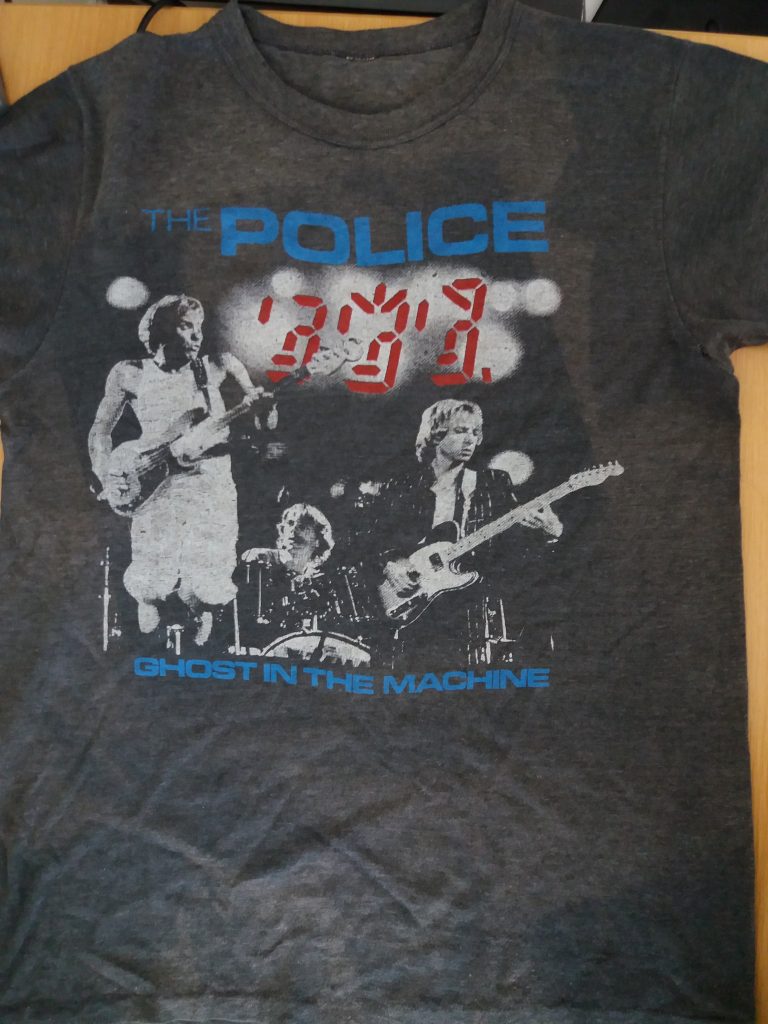 Ghost in the Machine Tour T-Shirt

(somewhat tighter-fitting than in 1981)

This was in the days before the Tunnel, so the trip included a leg on the ferry – a rough crossing which highlighted my inclination towards sea-sickness – followed by an interminable drive. We stopped overnight in Cologne, before spending the next day in the city sightseeing.
At 18, I wasn’t really interested in the culture and architecture – and probably wouldn’t be much more interested now. With my limited German, we focused on eating and drinking (mainly drinking) as we waited for evening to arrive.
At the venue, we found ourselves mingling with a group of Germans of a similar age. This was my first time in Germany, and my impression of German character up to then had been acquired largely through film and television. Bearing in mind such material would usually have involved Hitler, the Gestapo and the SS, my perceptions were somewhat skewed. Those perceptions were shattered, however, within minutes. When they heard us talking, they enthusiastically asked if we were from England before encouraging us to join them. They were great fun and made us very welcome.
So far, I’ve mentioned only Zim as a companion on this trip. There was at least one other, though the reason I remember Karen being there is because she misheard the name of the support band and became really excited that U2 would be playing. Who? I remember wondering at the time. Karen was gutted, however, when she realised her mistake and Level 42 came on instead. I wasn’t particularly familiar with them either, but they were entertaining enough, though I couldn’t tell you what they played. I suspect their bigger hits were still to be recorded (or written).
As for The Police, their performance was brilliant. Highlights were undoubtedly the big hits, but there were other outstanding moments.
Invisible Sun is still, for me, one of their best songs. There’s something very haunting about it and, live, it seemed even more meaningful.
Spirits in the Material World must have been new to me then, because I fell into the trap of using twisted lyrics (you know the sort of thing: Billy Ocean’s When You Go and Get Stuffed, and Paul Young’s Every Time You Go Away (you take a piece of meat with you)). To my utter horror now, I clearly recall singing, at the top of my voice, “Auschwitz in the material world”. If there ever was a time and place for that, a concert hall in Essen wasn’t it. Somehow, I wasn’t lynched, but the memory lingers like a dark cloud.
Finally, there was Be My Girl – Sally. To be fair, they didn’t play the whole thing – they didn’t need to. For the fans, they knew exactly what it was about. They only need to hear the words:

If you haven’t listened to the Outlandos D’Amour album, you might not be familiar with this, so to put you out of your misery, here it is…

Gig over, it was straight on the coach to London. Understandably, by the time we got home, we were knackered. It was a lot of travelling for one gig, but it was a great experience. So much so we decided to catch The Police again two months later at Stafford Bingley Hall, where they were supported by Jools Holland and his Millionaires (which made up for never seeing him with Squeeze).
Looking back now, it seems strange I never saw them again. Perhaps it was the rising cost of tickets and the fact they only played big venues from then on. Maybe it was a case of having ticked the box I didn’t feel the need. But I am glad I went – and I have great memories of going.