The Gigging Years: A Kind of Magic

Having been in the wrong kind of mood when I saw Queen in 1984, then missing them at Live Aid as a matter of principle, when the opportunity arose to see them again, I didn’t hesitate.

The Magic tour was being held in stadiums, so it was time to head to Wembley.

Support acts were The Alarm, INXS and Status Quo.

The Alarm weren’t really on my radar and, in all honesty, after they’d done their set, fell off it again.

INXS were a band I was aware of, but hadn’t really taken much notice of up to then. They did put on a great show, though, and 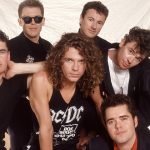 it remains a mystery to me why I didn’t go and see them again in later years.

Quo were… well, Quo! They came out and put on a cracking show, connecting with the crowd in their usual, almost casual, manner, and played all the songs we’ve come to know and love. 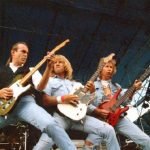 Whenever I attended any Wembley gig, I avoided the stands otherwise you were guaranteed to be further away from the stage. Of course, that was possible at ground level, but it wasn’t the plan. We’d find a spot somewhere in the quarter of the pitch closest to the stage, then gradually work our way forward as the afternoon and evening progressed. Not that I ever managed to get right to the front, but you could generally get close enough to be able to see the artists without resorting to watching the screens.

This strategy did mean you’d settle in a spot for a while every now and then before moving on. That said, even though you might think you were stopping in one place, the gentle movement of the crowd around you could mean that, like treading water in the sea, the tide moves you along.

From memory, I think around half a dozen of us went together. The only girl I can remember was my then girlfriend. She wasn’t particularly a fan of Quo, but it didn’t stop her joining in with the air guitar – much to the delight and amusement of my friends. While Quo were on, we were still far enough back to have sufficient space around us to form a small circle without bumping others and we rocked and rolled and sang and generally had a good time.

It was the middle of summer when we went to this gig and, with Queen coming on stage early evening, we were able to see the band clearly enough without extra lighting to start with.

Even though I’d seen them before, I was struck this time by how Freddie dominated the stage, and clearly loved being the centre of attention. Not that he came across as being conceited or big-headed. Yes, he was a show-off, but he managed to temper that with his connection to the crowd. We all loved him, from the One Vision opening, to the “Day-Oh!” sing-backs, to the strutting with the sawn-off mic stand, to the punching the air during the anthemic songs. He really was a man who knew how to touch his audience and take them along for the ride. Recalling that now, and knowing he’s no longer with us, does bring a lump to the throat. When he sang Who Wants To Live Forever? it felt very poignant. If only we’d understood why.

For two hours, we sang, we chanted, we clapped (especially to Radio Ga Ga), we danced and, yes, we celebrated the joy that was Queen. And when we finally left for our train home, we knew we’d seen something very special.

The Magic tour was Queen’s last with Freddie, and I’ve never felt inclined to go and see them without him. In one sense, it would just feel like going to see a glorified tribute band. That’s said with no disrespect to the other band members. All are fine musicians and songwriters. But, for me, the band was the sum of its parts and, without Freddie, it could never be the same again.

Zim was one of the friends who was at the gig and the following Christmas he bought me the live album taken from the concert. Written across the back of the sleeve were the words: “We was there!” and I remember feeling the prickling at the back of my eyes when I read that. It had been a special day. And we still didn’t know just how special it had been.

Of all Queen’s songs, One Vision seems to affect me the most. In part, I’m sure it’s because of the opening of this concert, but the lyrics seem to urge you on to achieve something, providing an anthem that motivates me. So that’s what I’m going to end on.