A couple of years ago, the incomparable Linda Hill made mention of the first Deepings Literary Festival on her blog, Linda’s Book Bag. As it happened, I was thinking I needed to go to some literary festivals and this one seemed like a good place to start. Sadly, the dates clashed with something else.

In the meantime, I’ve been to a couple of festivals elsewhere and enjoyed them. This one remained on my radar, though, so when I saw they were repeating it this year, I made plans to go for one of the days.

I’m not the greatest in a morning, or noted for my punctuality, so we arrived at our first venue with only a couple of minutes to spare. There, we were welcomed by Linda, who was waiting to round up any stragglers. Greetings were brief, and I didn’t get around to introducing her to my partner. This lack of introduction continued all morning – though only with Linda! – so I’ll put that right at some point, because I suspect they’d get on well.

Because of an array of commitments, it was only a few weeks before the festival that we finally decided which day to go. My partner and I are both writers, but we each have our own interests, so there was some debate, but we reached agreement quite quickly on which events to attend.

The first session we’d agreed on was to see Milly Johnson talk about her work. I knew nothing about her, but my partner had bought several of her books in the past. I don’t feel compelled to read her novels, but that’s simply a matter of taste. As a speaker, she was brilliant. She has the sort of down to earth manner you’d expect of a Barnsley lass, and very funny with it. Her poem about the menopause was a classic; I almost wanted to be a menopausal woman so I could empathise. (I did say almost.)

As a side note, we called in to see my mum a few days later and were telling her about this session. When we mentioned the author’s name, my mum got up and left the room for a few moments. (That sounds as if it was quite sudden but, at 82 and with mobility issues, nothing happens very suddenly where my mum’s concerned.) She came back a minute or so later carrying a Milly Johnson book, announcing: “I’m reading this at the moment.” It wasn’t the only coincidence we experienced. 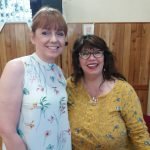 When Milly’s session finished, we got a book signed, and briefly saw author Eva Jordan, who I’d met a couple of years earlier at a Book Connectors event. I was expecting to see her later in the day because I knew she was taking part in something we were going to, so greetings were brief with a promise to catch up then.

It was time to pop outside to stretch our legs, and we bumped into Anne Williams, of Being Anne fame. I’ve met Anne a few times now, and it’s always a pleasure to see her. Like Linda, she’s a great supporter of authors, especially Indies like me. When I think about her review of Ravens Gathering, I’m still overwhelmed at my good fortune in having her feedback.

Anne was staying for two days, she told us, and was clearly thoroughly enjoying herself. She sat with us for my choice of speaker, Barbara Copperthwaite. While we were waiting, I spotted author Rachel Sargeant sitting at the front and she came over for a brief chat before Barbara was introduced. I’d met Rachel a few months earlier at a gathering of authors and bloggers in Stoke on Trent (I know. I do get about a bit), and it was good to see her again. As it happens, we bumped into her and her husband later in the day and were able to compare notes about what we’d seen already. She wrote her own post about her experience at the festival here.

I seem to have come across Barbara Copperthwaite quite a lot in the last year or so. As a regular reader of book blogs, I often share the reviews on social media. Although I hadn’t got around to reading anything by Barbara, I had shared some reviews and each time she’d thanked me for doing so, which is always nice. I’d intended to try one of her books and, having tickets to see her, made the effort to read Invisible a week or two beforehand, which I reviewed on Amazon.

Barbara’s style was quite different to Milly Johnson’s, but I think it’s important to have contrast in speakers. If they all do the same thing, it can get quite boring. In practice, we were far from bored, and both my partner and I got a lot out of each session.

Inevitably, I did buy another of Barbara’s books and queued up to get her signature in it. To my delight, she did remember my name – so all that sharing worked!

With a brief chat to one or two other people at the venue, we headed out into the sunshine. There was an interesting afternoon ahead of us…