What Plaything Can You Offer Me Today?

Clearly, I have reached that stage in life. With increasing frequency, the people who have formed the backdrop to my formative years – musicians, movie stars, TV personalities, authors – are shuffling off this mortal coil. Last year alone saw Leonard Cohen, Roger Moore and Robert Vaughn disappear – and they’re just the ones that spring readily to mind. Yesterday saw the news of another icon of his time – though there were a few blank faces when I mentioned his name, so it really was a particular time when he had that impact.

Peter Wyngarde first came to my attention as one of the three lead actors in Department S, a TV series from the late ‘60s – and well overdue an appearance in my Gogglebox posts. Made back to back with Randall and Hopkirk (Deceased), it was a much different kind of show and, in its time, was probably quite innovative.

Wyngarde’s character was Jason King, improbably a bestselling author who also worked for Interpol. In spite of that improbability, the producers clearly thought he was the main attraction, because they went on to make a spin off series simply called Jason King.  Both series were successful, though the latter more so, and Wyngarde became a huge star.

When you look at photos of him now, he epitomised the time – or, more accurately, how we perceived the time. His thick, long hair, his moustache, his wardrobe, all exemplified the style so many men aspired to – and so many women seemed to be attracted to. 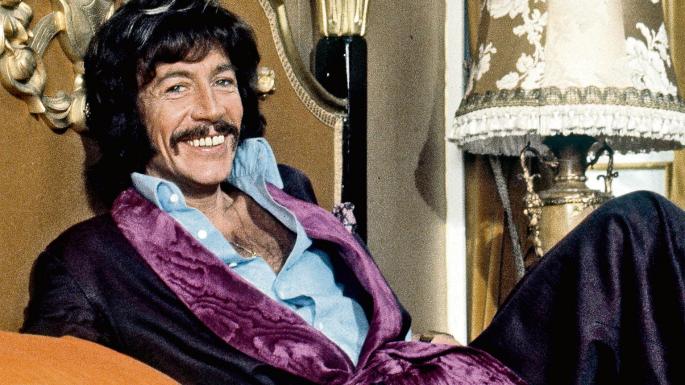 Which was ironic really, because this supposed symbol of machismo was gay. Not that you can’t be macho and gay, but in the late ‘60s and early ‘70s, our only gay role models were camp – think Larry Grayson and John Inman. And, bearing in mind that we were in a time when homosexuality had only recently been legalised, there was still a high degree of intolerance – if not animosity – towards the gay community. It’s probably no surprise, then, that his rising star suddenly plummeted following fines for public indecency in the mid-’70s. These days, the publicity would probably result in him being offered another high-profile TV series (or a chart hit if you were George Michael). But those were less forgiving times.

From my point of view, there seemed to be a big gap between seeing him in Jason King and the next time I saw him. In reality, it was probably only seven or eight years, but that’s a long time when you’re a child. When I referred to the next time I saw him, you will have to give me some latitude, because his face wasn’t on display. Still, his distinctive voice gave the game away from behind the mask of Klytus, sidekick to Ming the Merciless in Flash Gordon – a film you either love or hate (I love it!). Wyngarde’s silky tones exude evil, and the fact that you get this purely from his voice is testament to his abilities as an actor.

Personally, I have seen very little else of his work – episodes of The Avengers and The Prisoner and the film The Innocents – but what is clear is that he was a very charismatic actor and – by all accounts – person.

Having lived to 90, we can hardly say he was snatched from us too young, but when I heard the news I did still feel a pang of loss. Almost certainly, it was the sense of losing another part of my childhood rather than any great connection with Wyngarde. Then again, the news did bring back some happy memories. And it’s prompted me to revisit those old TV shows – as if I needed any encouragement!

In the mean time, in case you don’t recognise the reference in the title of this post, you can hear Wyngarde as Klytus at the beginning of this video. And it’s a great theme if you want to listen to the rest!