In my previous post (which I’d recommend you read before going any further), I only started to provide a flavour of the event as I began to experience it. The friends I’d met up with had been almost unknown to me little more than 18 months earlier, and yet I do feel as if I’ve known them for much longer. I suspect they feel the time has dragged as well.

Having reacquainted ourselves, though, we went in search of my publisher’s stand (probably closer to the size of a decent bathroom compared to the wide range of sizes that seemed to occupy the exhibition halls). There, hidden on their bookshelves was a copy of that masterpiece of fiction what I wrote.

This is me holding said masterpiece and clearly distracted by something more interesting than the photographer (sorry, Sacha).

Over my shoulder, you can see M. Le Pard deep in conversation – and the edge of Esther’s head.

When we’d finished there, I separated out from the others and went for a wander on my own. I had no plan to look for anything in particular, but I did want to get a sense of the place and the event. Apart from the main halls (huge, let me tell you), there were various rooms or smaller halls that led off them, often with specialist areas of publishing in them. There were lots of things to see, from educational publications, through foreign language, illustrators, childrens books to the impressively glossy stands where the big publishing houses waved their affluence in the faces of the much more restrained exhibitors. Or should that be constrained, since they obviously didn’t have the same budgets.

As well as the fixed stands, though, there were others walking the floors dishing out business cards and looking for opportunities. I’ve worked on exhibitions myself, though none on the scale of this. I know it’s hard work when you’re touting for business, so I’m always polite – as long as they are too.

I’ve mentioned the Writers Block. This was an area set aside for presentations and discussions, and during the course of both days, I did stay to watch some of these, some on my own, others with my companions. What surprised me was that, whilst some of the presentations were good, I’d got more out of presentations made at other, less prestigious events. But maybe I just saw the wrong ones.

Although I wasn’t on my feet all day, it was still quite tiring, so the stragglers (Lucy and Geoff had to leave earlier), headed over the road for a relaxing drink and chat before heading off in various directions. It’s fair to say I slept well that night.

When Sacha had posted on the Tuesday, the reports suggested things were manic. Wednesday had been busy, but not as frenetic, whereas Thursday saw a much more pedestrian pace to the event. Clearly the busiest part was over. Only three of us made it that day – Sacha was no doubt in a self-induced coma, and Lucy had only been able to attend on Wednesday.

It was a more relaxing visit, and it was good to have another wander and meet and chat with a few people. Still, for me, I felt one day would probably have been enough.

I’m glad I went, though. The two days provided me with a better idea of what to expect in future (I will go again), and reinforced my views regarding the direction of travel for the publishing industry. As is often the case when you go to this kind of event, you spend most of your time getting a feel for what you can and should do while you’re there. So, when I go next year, I’ll be a lot clearer on what I want to get out of the visit.

And next week, I go to the Writing East Midlands Conference. This will be my fourth, so I know exactly what I want from that, and I’m looking forward to seeing some familiar faces.

As I’ve mentioned elsewhere, Ravens Gathering has just been released in paperback. Just before I arrived at the venue, I received a message from a friend saying he’d just received his copy and was looking forward to reading it. A photo of the book was attached to the message, so presumably he felt I needed proof. Still, little things like that provide some encouragement.

The following morning as I walked from my hotel, I received another message, this one from a recent acquaintance who had just read the book, and was posting a review. What pleased me the most about this was that, it was clear from the wording of his review that he really got what I’d tried to do.

So I’ve come away from LBF feeling very positive about my plans for this year.

And just to prove I’m not always distracted, Sacha… 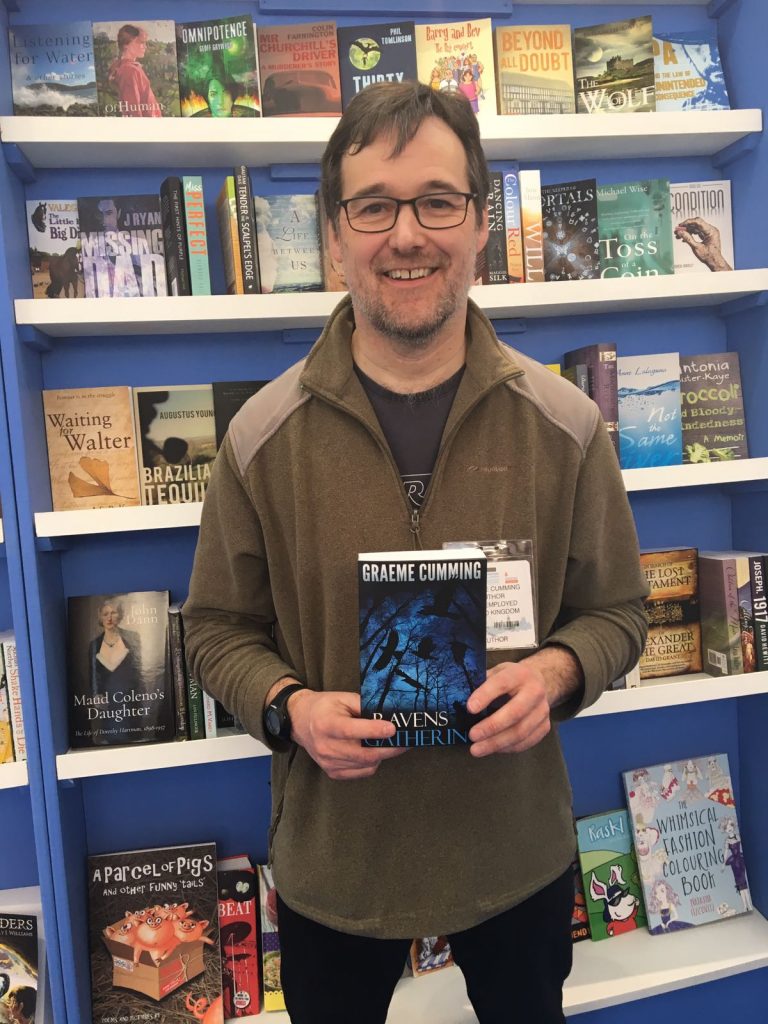