Gogglebox: What Could Be More FAB?

I wrote recently about watching Stingray, and how exciting it was to me as a child – and even as a grown-up. But, good as it was, it still couldn’t compare to the next series Gerry Anderson came up with.

From that countdown to the preview of what’s coming next, to the rousing Thunderbirds March, it is one of the greatest TV title sequences ever. I suspect it also inspires a whole rush of nostalgia from TV viewers of all ages, whether they watched the show as children themselves or watched it with their own children – and I’ve done both. 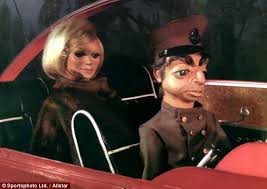 The scale of the concept is fantastic, with a family living on an island in the Pacific leading an apparently idyllic life, while operating an organisation aimed at carrying out rescues when disaster strikes anywhere around the world. At the same time, they allegedly have agents situated globally to help them with stuff that doesn’t require the big rescue gear. I say allegedly, because we only ever see their London agent – and her chauffeur.

Looking at the big picture stuff, on the one hand, you do have to wonder: “How could five brothers with four rescue craft and a shedload of other high-tech rescue equipment really provide that kind of service to the world when whole governments and NGOs can’t achieve a fraction of that?” And then you realise they don’t have to go through committees and deal with bureaucracy so, if it were to actually happen in real life, they’d still probably achieve more on their own.
Regardless, we all know it’s more than a little far-fetched. We all know that some of the rescues they carry out would, frankly, be better left to other authorities so their equipment could be used in more specialised situations. But it is just entertainment, and it’s good to sit back and enjoy the ride.
And what a ride! Was there ever a more convoluted way to get yourself into a pilot’s seat than in this sequence with Thunderbird 2?

I can’t help but think that diving board should have looked a little more scorched.
As for the London agent, I suspect Lady Penelope formed the foundations of some rather questionable fixations between young boys and puppets over the years… Her chauffeur, on the other hand, provided excellent light relief, both in his manner and his actions. The revelation in one episode that he’d previously been a burglar only added to the legend.
The Tracy family were American because, as with Stingray, Anderson clearly felt it was necessary to capture the lucrative US market. And why not? If it sold well there, the chances were more episodes would be made. It makes sense in theory, but the fact that only 2 series were made probably tells its own tale.
It could be argued that it’s a shame only thirty or so episodes were ever made, but we never grow tired of watching them. I suppose it’s a bit like Fawlty Towers: only 12 episodes there, but all classics.
The creativity of the effects department can’t be overstated. Run by Derek Meddings (who I’ve commented on before), it built the Thunderbirds themselves, the rescue equipment housed in the pods carried by Thunderbird 2, all of the other land vehicles, boats, aircraft and spacecraft (because they didn’t restrict themselves to performing rescues on Earth). Aside from the transport and equipment, they built Tracy Island, Lady Penelope’s home, and all the other buildings and locations. I said it before about Stingray, but this wasn’t just a puppet show, this was a show reliant on models, and the inventiveness of the designers merits at least as much credit as that of the originators of the concept and puppets.
Thunderbirds was escapism on a grand scale. And you’d think it would have transferred well to the big screen, but neither the puppet versions produced in the ‘60s, nor the live action version made in the early noughties were successful. Sometimes, you just have to stick to the winning formula, and that was true for the more recent TV series. I watched one episode out of curiosity and was, unsurprisingly, disappointed. The shorter screen time meant the action was rushed. Sometimes it’s good to draw things out a bit, build up the tension, create a sense of anticipation. Instead, everything just rushed along – something I’ve noticed is beginning to happen in movies too. The puppets were characters in themselves, and the conversion to CGI loses something as far as I’m concerned.
There are plenty of articles, blog posts and websites elsewhere that explain the technicalities of how things were achieved in this series – and others by Gerry Anderson – so I don’t propose to explain any of it here. I’d probably get some of it wrong anyway. Instead, I’ll leave you with one of my favourite clips from the first episode. It showcases the work of the technicians, whilst also giving a sense of how dramatic the series could be. You may actually forget for a while that they’re only puppets and models…