Gogglebox: Voyage to the Bottom of the Sea

I’ve spoken before about my affinity with water. As a sailor, that’s probably a given, but I love being in the water as much as on it – if you’d seen me sail, you’d understand why that’s not a bad thing – and I don’t really remember a time when I didn’t feel like that.

With that in mind, it probably comes as no surprise that I enjoyed watching TV shows that included time spent under water – and few spent as much time there as…

It probably wasn’t until the ‘70s that I realised the series was a spin-off from a movie of the same name. I did watch it once, but by then Richard Basehart had firmly placed himself in my mind as Admiral Nelson (obviously a lot of thought went into naming that character) as had David Hedison as Captain Crane. Walter Pidgeon and Robert Sterling playing the same roles in the film just didn’t seem right. Maybe if I’d seen the film first, I’d have felt differently.

So, apart from the underwater setting, what was it about this series that dragged me in?

The first thing was the submarine itself. Accurate images of the Seaview have been surprisingly hard to find on the Net, but this one seems close enough. 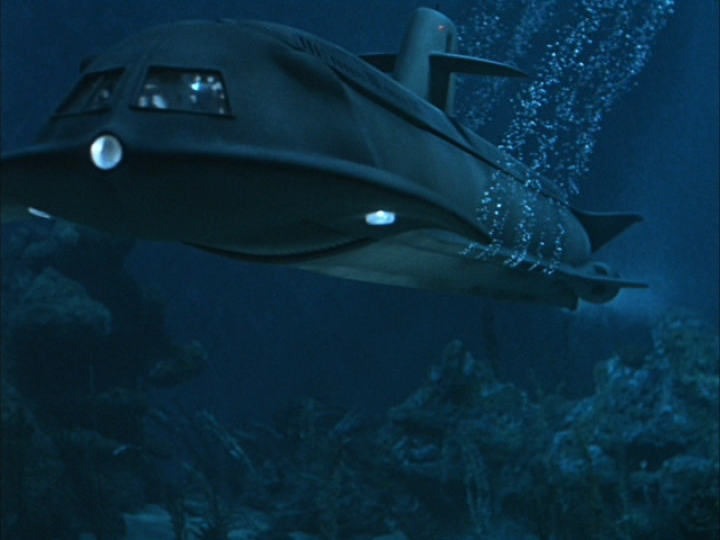 The most obvious difference between this and any other submarine is the windows at the front. I have been on a submarine with windows, but it didn’t submerge much more than a hundred metres, so the pressure on the glass wouldn’t have been so great. As the series title suggests, Seaview was designed to go much deeper, and having the ability to look outside the vessel offered loads of potential for drama. When sea monsters appeared (and they did with remarkable frequency), they weren’t just a blip on the sonar.

Less obvious are the wing-like curve of the bow and the tail fins, all offering a more interesting shape than the typical “tube” we associate with submarines.

You might also have noticed that the bottom of the hull has a slight recess close to the bow, and that was the hatch that opened to release the secondary, but undoubtedly more exciting, craft – the Flying Sub. Do I need to explain what that did? 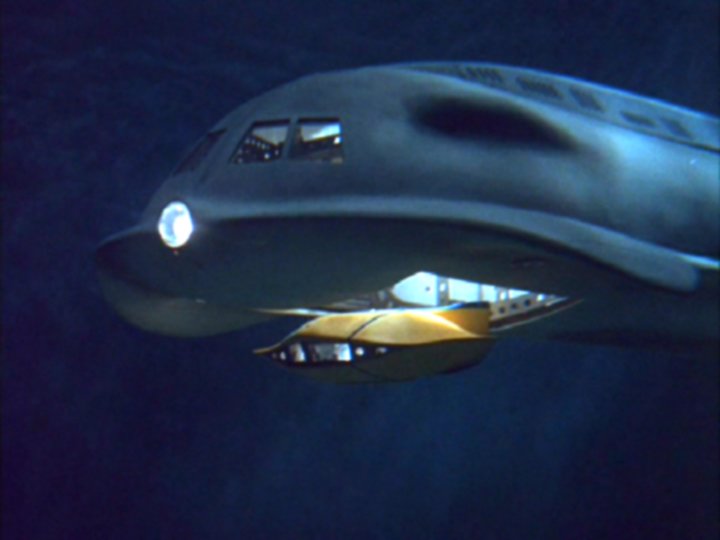 So, the confines of life on a submarine offered their own potential dramas, but the opportunity to use the smaller craft created opportunities to broaden the settings for action.

Like many TV series of the time, it combined sci-fi with fantasy and action. I’ve already mentioned the sea monsters, and these could take many forms – especially humanoid (in reality, the limited range of actors who don’t look human in shape has always been a barrier to doing otherwise, but the lack of CGI at the time was even more limiting). Episodes included giants, men dressed in what were really little more than elaborate gorilla suits – and not always that elaborate! – ghosts and robots. Some of these were in the sea, but most seemed to find their way into the Seaview in order to generate more present danger.

As far as the characters were concerned, I related more to Lee Crane, probably because I liked my heroes to look as if they were up for some action (maybe I should rephrase that…) whereas, to a young boy, Richard Basehart’s Nelson looked too middle-aged. The series was launched in 1964, the year after I was born, so I think you can safely say I wasn’t an early viewer. But I’d guess I was watching it by the time the last series was ran in 1968. That said, I’m pretty confident I watched it all over again in the ‘70s, so it must have been re-run then.

Looking back at it now, the creatures seem to be very amateurish, and the storylines are probably not that great but, at the time, with the potential to explore the unknown (and still very much so) depths of the oceans, and the concepts of nuclear powered subs, lasers that could be used underwater and subs that could fly…well, what wasn’t there to like?

It’s also worth noting that this series was Irwin Allen’s first foray into television. More noted in the ’70s for his disaster movies Towering Inferno and The Poseidon Adventure, in the ‘60s he was responsible for some of the more innovative TV series of the decade, leaning towards sci-fi, but incorporating action and adventure at the same time. I’ll come back to those in the future because they all played a part in my viewing habits as a child and teenager.

Ordinarily, I’d include clips from the series to give readers more of a flavour, but the videos available online are largely full episodes, which may be a little on the long side. Instead, I’ve found this short trailer for a DVD box set that might will give some indication of what I’ve been talking about.

Arguably, the concept behind Voyage to the Bottom of the Sea could still work today – after all it’s just Star Trek underwater. That said, whilst it offered some originality in the ’60s, there would have to be some major changes to create sufficient interest for viewers today. It was good to look back at it, but I don’t hanker after it.