In the mid-1970s, Brian Clemens and Albert Fennell, the main drivers of The Avengers, had another crack with John Steed and introduced The New Avengers. By the time that’d run its course, though, they had a completely different project in mind.

Where The New Avengers had strayed back to the more bizarre and surreal style of the Emma Peel and Tara King years, this new series would be much more down to earth.

True, it involved a completely fictitious agency that combined crime-fighting and intelligence work. And it’s fair to say the chances of such an agency existing in the real world were pretty slim, since police and intelligence services were often at loggerheads in the ’70s and ’80s. This was still the era of the Cold War, as well as the height of the so-called ‘Troubles’ in Northern Ireland, and the intelligence services seemed to take precedence. Still, the concept was good, and it worked as a device that allowed the scriptwriters lots of scope. 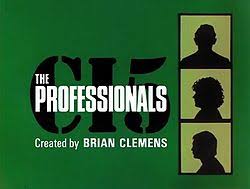 So we were introduced to CI5 (Criminal Intelligence 5), the brainchild of George Cowley, played by Gordon Jackson – whose casting surprised me. Back then, the lines between fact and fiction still felt blurred. Having seen the likes of Roger Moore, Patrick McGoohan and Robert Vaughn playing very similar roles when they showed up in a TV series, I’d assumed acting was pretty much playing the same part, just with a different 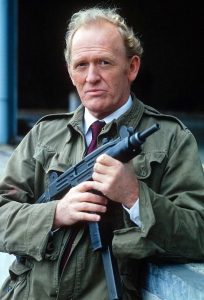 name. Up to then, the only thing I’d seen Gordon Jackson in was Upstairs Downstairs, where he played a butler. Aside from being Scottish, there was no similarity between the two characters.

Another surprise was Lewis Collins. I’d only seen him in one role before, a lodger in a little-known sitcom called The Cuckoo Waltz. In that, he played a light-hearted, laid-back individual, who was something of a dandy, and shallow with it. Bodie was completely different. His stylish locks had been replaced with 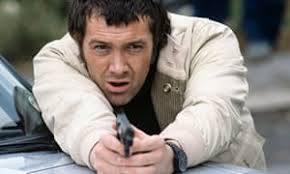 a close crop, and the cheeky-chappy had become a serious, hard-hitting individual who was happy to shoot – or punch – first and ask questions later. Ex-SAS, Bodie was brawn and brains and Collins’s transformation was convincing enough for me to forget his previous incarnation by the end of the first episode.

I wasn’t familiar with Martin Shaw at the time, though he’s probably better remembered than either of his colleagues – largely because he’s still alive and appears on TV regularly. His character was ex-police, which squared the triangle, so to speak. More thoughtful, and stuck with a questionable perm which was probably 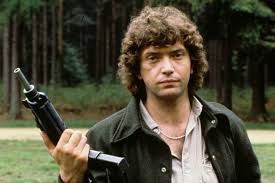 fashionable once, Doyle was the perfect foil for Bodie.

The chemistry between the two was undeniable. Allegedly, much of their banter was ad-libbed. Whether that’s true or not, it certainly came across naturally enough.

The Professionals offered something different at the time, I’m guessing something the viewing public were ready for. Starsky and Hutch had begun to go off the boil, so Bodie and Doyle’s hard-hitting and often violent escapades filled the gap. The Sweeney was also nearing the end of its run, so a British series with gritty action was bound to pick up support from fans of the Jack Regan school of policing.

It also seemed to tap into the public’s concerns of the time. Terrorism was on the increase, not only from Irish Republicans, but also the Middle East, where tensions were beginning to spill over into other parts of the world.

Aside from the terrorism aspect, the Cold War still offered plenty of material to play with. The public seemed to back the use of force to crack down on crime, so the concept of CI5 chimed with viewers.

Souped-up Escorts and Capris were the cars of choice for The Professionals. I’m guessing the producers came to a good deal with Ford, but those cars also offered more realism. Unlike Simon Templar’s distinctive Volvo P1800 with personalised plates, or Starksy’s brash Gran Torino, Bodie and Doyle’s cars were more likely to blend in, making them more realistic for the job.

And there was a genuine sense of peril at times. When they were in a fight, you felt like the bad guys were really trying to give them a good kicking. Cuts and bruises would appear, bullet wounds looked more realistic. In the 1960s, if someone was shot, you wouldn’t even see a bullet hole in their clothing. Those days were well and truly gone. There was still more realism to come, but big strides forward had been taken.

I watched episodes of The Professionals a couple of years ago. It’s fair to say, it has dated. And I was surprised to realise Lewis Collins actually looked a bit chunky at times, rather than the fit bloke I’d seen him as back in the day. That said, I am comparing it to the unrealistically muscular, highly toned bodies we tend to see in film and TV nowadays. Frankly, knowing Collins was also in the Territorial Army, held a pilot’s licence, loved parachuting, was a martial artist and a marksman, I’d have been happy to have him on my side in a fight any day.

A remake of The Professionals was attempted on Sky about twenty years ago. Its ratings were poor and it only lasted one series. That doesn’t come as a surprise. Many of the reasons I’ve given for the original series being popular had changed. The Cold War was over, the Good Friday Agreement had been signed, and terrorism had a more global stage than it had before. Also, the support for police taking a hard line against criminals had altered. We’ve seen too many miscarriages of justice to feel comfortable with it. The only situation where that works on TV now is if you set the series back in the ’70s or ’80s like in Life on Mars or Ashes to Ashes.

It’s still good to watch Bodie and Doyle in action, but only for reasons of nostalgia. And who doesn’t feel excited when they see a car come crashing through plate glass…