Having lived in the historic county of Nottinghamshire for most of my life, and now living close to the edge of what remains of Sherwood Forest, it’s perhaps inevitable that I’m drawn to tales of Robin Hood.
A few years ago, Russell Crowe took on the role in a film that was surprisingly bad considering it was directed by Ridley Scott. 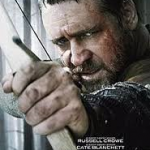 His accent often tipping into Irish was distracting enough to make the rest of the movie unmemorable – and I certainly don’t have any desire to go back and try it again.

More recently, Taron Egerton has had a go at it. Personally, I think Crowe is over-rated. Egerton, on the other hand, has proved himself to be versatile. His Eddie (the Eagle) Edwards contrasted significantly with his Eggsy, and we saw something different again in the Krays movie, Legend, in which he played “Mad Teddy” Smith. So, although he wouldn’t have been an obvious choice to play Robin Hood, I was willing to give him a chance.
As it turned out, he was okay, but the film was so full of holes it’s a wonder it didn’t sink before reaching the screen. Following Crowe’s example, Maid Marion and Will Scarlett had Irish accents. To be fair, I don’t expect a strong Nottingham accent to be used, but I certainly don’t expect to hear supposed locals sounding as if they’re from overseas (Kevin Costner is forgiven only because Prince of Thieves is such a brilliant film).
Then there were the costumes. Did Robin Hood really wear a quilted jacket? 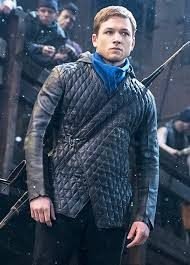 Had the Sherriff arrived in Nottingham fresh from working on the Senate in Star Wars? 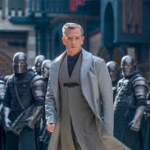 And did I really see someone arrive for a ball wearing high heels?

Nottinghamshire is noted for its coal mining, but the pit depicted here looked more dystopian steampunk than mediaeval. As for Sherwood Forest – an intrinsic part of the legends – I was beginning to wonder if it would put in an appearance at all. It did, but only right at the end when the scene was set for a sequel (please no!).
And these were just the obvious niggles that distracted from a plot that offered nothing new whilst ignoring the heritage – a neat trick if you can do it!
Anyone want to guess how I felt about it?
Still, watching it has made me reflect on my early experiences of Robin Hood. Unsurprisingly, they came from television. Not for me the TV series from the noughties (I didn’t watch much TV then, and still don’t). I did see a couple of episodes, and thought Keith Allen was good as the Sherriff, but wasn’t convinced by Jonas Armstrong’s Robin. That said, I did hear good things about it.
Robin of Sherwood also passed me by. I saw a few episodes, but it came at a time when I didn’t have a TV set. Again, I understand it was very good, and what I did see seemed to support that.
My Robin Hood, though, was Richard Greene.

Clean cut (they all were in the fifties), but still the epitome of the roguish outlaw, outwitting the Sherriff every week and somehow convincing me it would be a good idea to live in a forest, despite the lack of amenities.

In fairness, I haven’t seen The Adventures of Robin Hood since I was a child, and I’d probably pour a degree of scorn on it if I watched it now. After all, it’s even older than I am. But my memories associate it with action and adventure, feats of derring-do, camaraderie and righting wrongs. When I went on to read stories of Robin Hood, they offered similar experiences, so it feels as if it was close to the legends.
I know the reality was different. If there even was a Robin Hood, it’s doubtful his heritage was the same as any of the screen incarnations. Still, there are certain stories that have persisted, and certain characters who are constants. Robin and Little John meeting for the first time and fighting for the right to cross a bridge, a scene that sets up their future friendship. In the new film, the only John is a Moor, and there’s no sign of a bridge. In spite of many early tales depicting Will Scarlett as a relative of Robin’s, here they are strangers. There’s are other twists to his role, but I try to avoid spoilers even when I think a movie isn’t worth seeing. Aside from John and Will, there are other regular characters among the outlaws: Friar Tuck, Much the Miller’s son and Alan A’Dale are the most common. These Merry Men are a big part of the legend, and shouldn’t be ignored.
Life may not have been as exciting as portrayed in that TV series, but if Robin Hood is a legend, why not make the lifestyle legendary too? Watching archery and sword fights alongside cunning plans to defeat the bad guy (and I’m not just talking of Gisbourne here) excited and entertained me as a child – and still does. If there really was a Robin Hood, the chances are he wasn’t a clean-living hero. But TV isn’t real life. We just want to be entertained. And what better way to entertain than with a song…