Back in the late 1960s, out of nowhere, the ITV channels started promoting two new series that were coming up. I know there were two, because the trailers were played back to back. The first was a police series. I can remember that, because uniformed officers appeared in most of the clips. But that’s all I can remember about it. I seem to think I watched it when it came on, but it clearly had nothing like the impact the other show did.

When one of the main characters is killed off in the first episode, that kind of grabs your attention. Bear in mind that I was only about 7 years old when Randall and Hopkirk (Deceased) was first screened.

By today’s standards, quite a drab title sequence, but the music does take me back to those childhood days.

Of course, I didn’t even know what “deceased” meant. Apparently, the Americans couldn’t be trusted to know either, because in the States it was called My Partner, the Ghost. To be fair, there are some very intelligent Americans. Unfortunately, TV producers over here seemed to make their assessments of intelligence based on Hanna Barbera cartoons. (These days they might be forgiven for making their judgements based on political leaders, but it’s probably better to not go there.)

Anyway, this primary school-aged child had to ask what “deceased” meant. I seem to recall being even more confused at the title of an episode of Bonanza called The Late Ben Cartwright, because it had nothing to do with tardiness. Still, it just goes to show that watching TV can be educational.  My use of vocabulary grew dramatically in those early years.

For those of you unfamiliar with this series, here’s the concept. Jeff Randall and Marty Hopkirk are private investigators struggling to make a living. When someone takes a dislike to an investigation they’re carrying out, Marty is run over and killed. But (and the Americans may have been ahead of me on this one) Marty comes back as a ghost, which turns out to be useful to a firm of PIs.

Yet again, ITC had come up with a series that crossed genres. Detectives and ghosts – what’s not to like?

It also combined the light-hearted with action. Yes, there were tense moments, but there was often comedy, particularly as Marty struggles to get to grips with what he can and can’t do in the physical world.

Mike Pratt played Randall. His lean frame and craggy features made him an unlikely looking hero, but his portrayal of a down-at-heel PI was spot on.

Kenneth Cope was probably the better known of the two at the time (though 7 year old me hadn’t heard of either of them) because he’d spent some time on Coronation Street. His abilities as a comic actor were used to great effect, but also his pathos, the latter most apparent when it came to his widow, Jeannie. Played by Annette Andre, up to then a regular guest on other ITC shows, this was – as far as I’m aware – her biggest role on a TV series. Even as a kid, I couldn’t work out how such an attractive woman would end up married to someone looking like Kenneth Cope, but I’ve always been shallow like that.

Following his death, Marty is only allowed to be seen by one person, and he chooses Jeff (“Only you can see me, Jeff, only you…”). As a result, there is occasional frustration at being unable to communicate with Jeannie, and that she lives her life oblivious to his presence.

Potentially a complex series, it never really felt it and, even as an adult, I’ve watched and enjoyed it for what it is: entertainment.

Unusually for me, I not only tolerated a remake of the series, but actually embraced it. In part this was because the concept was more important than the casting. Which is fortunate, because I wasn’t a massive fan of Vic Reeves and Bob Mortimer. Nevertheless, together with Emilia Fox as Jeannie, they played the parts well. Clearly some aspects were changed, but the producers really got it. They didn’t try to make it something it wasn’t, and the style used was very much a throwback to the way ‘60s and ‘70s television was made. Given the casting, it was inevitably more light-hearted, but when the first episode aired and the pre-title scenes set the story up nicely before launching into the new titles, I knew it was going to work – and it did. 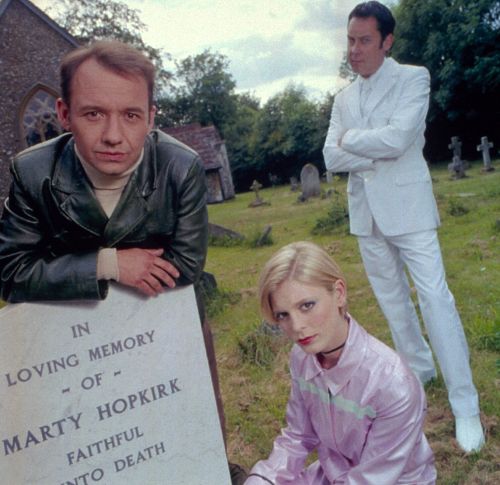 If you watched the original series yourself, you’ll know what I’ve been talking about here. If you didn’t, look it up and give it a go.  And, just in case you’re still not sure, I’d better warn you: there’s a ghost in it.