For most of my time at secondary school, I wrote stories to entertain classmates. In the main, they were parodies (not that I knew what a parody was back then) of existing movies and TV series. Very often, though, they’d include versions of real people we all knew.

The first story I remember was a piss-take of Jaws, but it also took the mickey out of a girl in my class who had prominent front teeth – a feature giving rise to her nickname: Bugsy. At the time, libel and slander weren’t things I was concerned about. Nor, more importantly, was the risk of offending or upsetting someone. I’ve grown up a bit now, so won’t be naming names here. Even so, I think it’s an interesting insight to my creativity, as well as my willingness to cross genres – because I made Bugsy a were-shark.

As it’s over forty years since I wrote it, I don’t recall what triggered her transformation. What I can tell you is that a local brook (no, I didn’t even provide a river to swim in, let alone a sea) became her hunting ground, and the intrepid Squint, Broody and Hooter (I did say it was a parody) were sent to stop her.

I seem to recall several sequels followed, and much hilarity was had at the expense of “Bugsy” and several other pupils.

By the time I reached the third and fourth years, I’d turned my attention to James Bond. Dr BO was a merciless attack on a particularly smelly lad in our year. The Goldfinger parody (Bellender) was undoubtedly a product of the immature adolescent humour I’m still struggling to grow out of, and was confiscated by an apparently horrified science teacher. I never did see it again, though subsequent reports suggested it was very popular in the staff room.

Around the same time, I came up with an idea that, thankfully, never ended up on paper. It was the introduction of a new martial art: Wan Kin. This had potential and, for some reason, the concept seemed to appeal to a lot of the other thirteen- and fourteen-year-old boys.

Of course, martial arts weren’t something we’d been much aware of. The biggest martial arts star of the day was Bruce Lee (in spite of him dying a couple of years earlier), but his movies were often X-rated because of their violence, so we struggled to get in to see them.

In the meantime, we were being introduced to martial arts through a TV series called Kung Fu.

The concept seemed unusual at the time. Not only seeing martial arts on the small screen, but also it being used in a Western (did I ever mention I like mixing genres?). 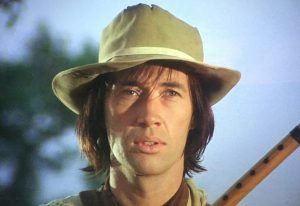 David Carradine played Kwai Chang Caine, whose father was American and his mother Chinese. Orphaned, he spends his formative years in a Shaolin monastery training to be a priest, where he becomes a martial arts expert. When his mentor is murdered, he kills the murderer and becomes a wanted man. He heads to America in search of his family.

So, that’s the set-up, and the series follows his wanderings in his quest. Along the way, he meets prejudice and sees injustice, and uses his unique skills (well, they’re unique in the Wild West) to deal with it.

You could probably tell from the titles, this wasn’t a fast-paced series. To be fair, by today’s standards, I don’t think many shows of the 1960s and ’70s were. But that’s not necessarily a bad thing. You could reflect on the story being told. As if to slow things down further, a lot of the fight scenes included slow-motion sequences, presumably to allow you to marvel at how well choreographed they were.

There were also the flashbacks to the time in the monastery, where lessons were learned. Some of them were physical, practical lessons, others were 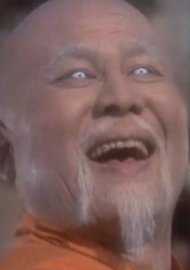 philosophical ones. Perhaps the most iconic image we get from the flashbacks is of the blind mentor, Master Po.

Kung Fu was a popular series in its time, and looking back on it as I have done to write this, I realise it probably has as much relevance today as it did then. It’s not very often I think a remake would be a good idea, and this isn’t an exception. But if any of the studios decided to remake it, I’d be less dismissive of the idea than I would be of most. Provided they kept the ethos right where the fighting is concerned. Caine does fight, but he isn’t aggressive. He deflects the violence others throw at him, and uses force only to defend himself and others. His stance is passive more often than not, which would need to remain in place for any remake.

Knowing how the studios work, and their inclination to violent solutions, they’d probably lose the point. So I’ve changed my mind. If they want to introduce a martial arts series, there’s an idea I had as a teenager…

Is there anything you created as a teenager that you think deserves a wider audience?