One Sunday evening in 1973, I managed to persuade my mum to let me watch a TV movie. I say persuaded because it was school the next morning and, I suspect like most households at that time, Sunday night in particular was a night for making sure you were ready for the week ahead. It was also bath night in our house, a major event in itself (did anyone else have Fairy Liquid instead of bubble bath?).

Back then, I’d take any excuse to plonk myself down in front of the TV. The fact we were still watching a rented black and white set was no deterrent. All the same, there was something about the trailer I’d seen that aroused even more interest than usual. The hero seemed to be part man, part machine and, although this has been done repeatedly since, I don’t think 10 year old me had encountered it before.

Not that he was anything other than completely human as the film opened. An astronaut was preparing to take off, though not in a rocket, which was unusual in itself. Everything seemed fairly low-key, which, in my opinion, is as it should be for scene-setting. Too often, now, movies rush into scenes without setting them up properly. The slower burn helps build things up, so when the dramatic happens it actually feels dramatic.

That said, this didn’t drag out. There was background stuff going on – more scene-setting – and the scenes cut back and forth, helping the build up as the astronaut took his ship into the sky then began to bring it down again. It was becoming clear that he was a test pilot and this was a new vehicle he was flying. And then this happened…

In fairness, that’s not exactly how it happened in the movie. Things went a little slower, but I know you’ve been waiting to see that and didn’t want you hanging on longer than necessary.

When it came to converting from a one-off movie to a TV series, the tone was less dark. The grimness of the accident was played down by comparison, 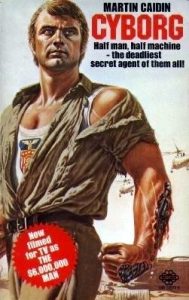 because the purpose of the show was to get on with the action, not dwell on the past. But the movie was darker, and slower moving, setting things up for the future. I suspect the book it was based on – Cyborg – was similarly dark, though I never got round to reading it. (Writing this, I decided to put that right, but the book’s out of print and second hand copies are priced accordingly. I’m curious, not desperate, so I’ll leave it for now – unless anyone can lend me a copy.)

But back to the series. We had a character who’d survived an horrific crash and been offered the chance to lead a more normal life than he otherwise would have. Replacement arm, legs and eye had to be better than being without them, didn’t they? Then again, being beholden to a government agency must have a down-side.

That dark aspect probably wasn’t going to offer great family entertainment, and it seems likely the producers wanted a broad base of potential viewers. On the cusp of secondary school 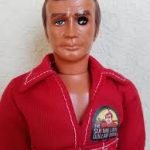 , that was fine with me. I wasn’t interested in severe pain or moral dilemmas. I just wanted to watch something exciting. So, I was just what the producers were looking for – especially as you can sell toys to kids not adults (well, you couldn’t in the ’70s, anyway).

The Six Million Dollar Man grabbed my attention for several years, although my enthusiasm waned towards the end. I did have the Steve Austin toy, though the eye was unsettling and Action Man could do more. Still, I can’t complain. It was one of the few times a parent gave in and bought me the latest fad (I never did get a Chopper). 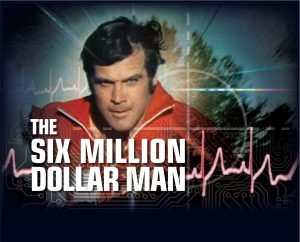 I’m not sure why my enthusiasm for the series diminished. It might’ve been because it’d been on for too long, or maybe I’d just outgrown it. I was pretty much done by the time the Bionic Woman came along.

When I look back on it now, I can see it was a ground-breaking series that offered an insight into the potential for the future. Or it seemed to. Bionics still has some way to go before it’ll integrate as seamlessly as The Six Million Dollar Man implied. One day, though. And hopefully it’ll be for positive reasons and not just as another weapon for government agencies.

I would add that this was yet another series from that era that didn’t slot neatly into a specific genre. With elements of sci-fi, adventure, crime, espionage and thriller, it catered to a wide audience.

There’s talk of a movie being made, though with inflation they’ve increased the value to six billion dollars. As ever, I’ll approach that with a degree of scepticism. After all, the remake of the Bionic Woman didn’t catch on.

For now, though, let’s just revel in some slow-motion running (how did that work?!), jumping and kicking. They don’t do sound effects like these any more…