From someone who writes a blog – from someone who writes, full stop – the message here might seem strange. Writing, by its very nature, is a solitary pastime. It’s not the sort of thing to do while you’re chatting to the person at the next desk, or if other people are in the room talking. For me, anyway, writing involves quiet space to concentrate. So you have to like being on your own.

For someone who likes their own company, social media seems like an ideal way to communicate. Reaching out to potential readers using Twitter, Facebook et al must be a godsend to most writers. But I’m still not comfortable with it. Don’t get me wrong. I can see the merits. And I use social media (otherwise, the chances are you wouldn’t be reading this), so I’m not suggesting it should be banished from this world. I just don’t get on with it as well as I should.

The really strange message I have is that, far from wanting to spend all my time alone, hidden behind a screen, I like meeting people. If you’re trying to sell books, it does limit your audience if you focus on personal contact to raise your profile. But it always feels much more satisfying.

In the space of a month, over April and May, I attended three completely different events that allowed me to connect personally. If I’d been a better blogger, I would have written about each event in detail long before now, but time passed by and I didn’t get to it. This late on, it doesn’t seem pertinent to provide extensive details about those events. Nevertheless, I can’t ignore them.

The first was the Self-Publishing Conference at Leicester. I had been to a couple in the past and found them useful. They are informative, with a choice of presentations covering a wide range of subjects, from ISBNs to overseas rights to (ironically) using social media. Over and above that, though, it provides an opportunity to talk to other people in the business, from fellow authors to professionals like editors and cover designers.

After each Conference I’ve been to, I’ve come away feeling more motivated to get on and do something – whether it’s writing more or knuckling down to some promotion. If you have self-published or are planning to, I’d recommend it.

The second event was quite different. Much more informal, but probably even more motivating. The delightful Anne Williams of Being Anne fame, arranged a gathering for the Facebook Group Book Connectors. For those who aren’t involved with the group, it comprises a range of authors and book bloggers, allowing them to connect informally through Facebook, but there also meet-ups arranged periodically. This was my third meeting in less than a year. The gathering took place in a pub in York – two boxes ticked there – and attracted people (that I know of) from as far afield as Hertfordshire and Edinburgh.

It was good to catch up with people I’d met at previous events, as well as making new friends. So I now have some additional authors to watch out for, as well as some new contacts in the book blogging community. As a result of that meeting I ended up arranging my first blog tour – it’ll be on in September, so watch this space.

The afternoon flew by, and I enjoyed every moment of it, especially when a few people said they’d heard good things about Ravens Gathering. I haven’t noticed a surge in sales yet, but it’s a slow process when you don’t use social media…

A week later, I was heading to Chiswick for the Bloggers Bash. In this case, I was going along in a semi-official capacity because I’d been on the committee arranging it.

The Bash was taking place in a room at the back of a pub that was set up for hosting regular comedy nights, so was kitted out perfectly. And there was enthusiasm for the event, with people arriving early, and leaving up to two hours after it was officially over.

Like the SP Conference, the day was structured, but there were plenty of opportunities to chat to people. Although it was an event aimed at bloggers, a good proportion were either authors or blogged about books, so I had lots of people to talk to with a common interest. I even managed to sell a few books on the day, as well as extracting some promises of reviews from book bloggers.

For those of you who weren’t there, here’s a picture taken at the event*. 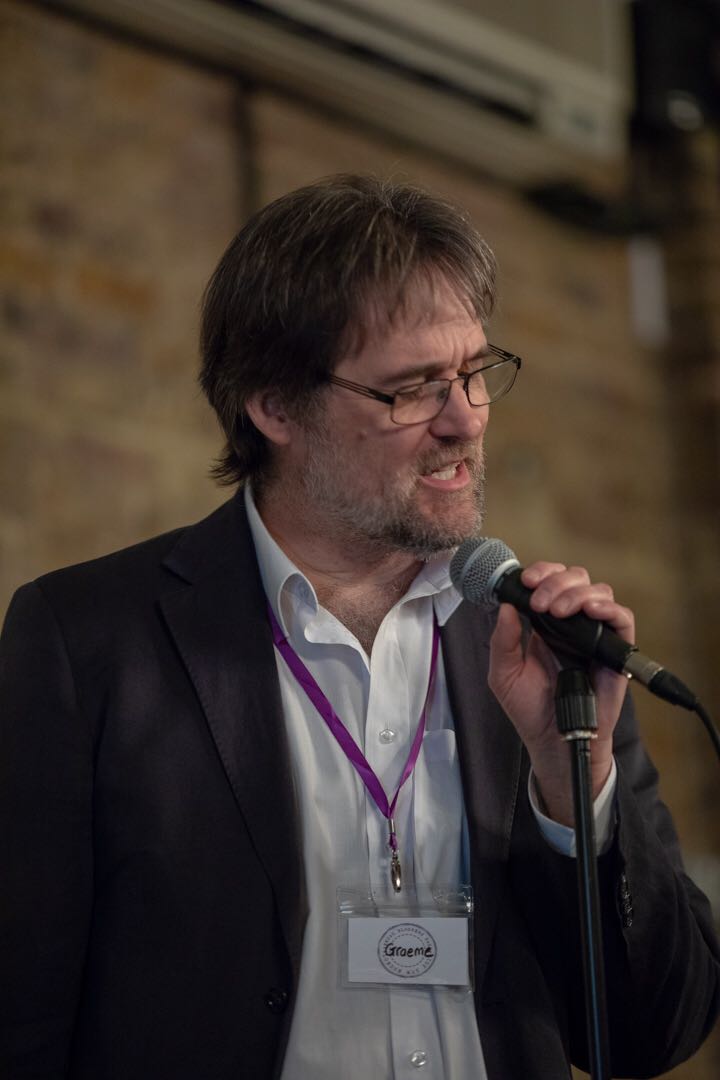 Feel free to say in the comments what you think I’m singing.

Since May, I haven’t had any events to go to, but am looking around now and will make sure I go to a few during the rest of the year.

In short, social media is useful, and you can get to know people surprisingly well online, but nothing quite beats the experience of sitting and having a chat, putting a proper face to a name, and connecting properly.

*A whole range of pictures were taken by Duncan Walker, one of which is so good I have it as my desktop display on my laptop. Feel free to take a look here at some of his work.