Perhaps unusually, I’m going to open up by saying that I know both authors of this book – but in this case, that knowledge will provide context to my review.

I first ‘met’ Sue online through her blog, and later in person at a gathering of bloggers in London. It was there I also met Stuart. There is something about both of them that borders on otherworldliness – but I mean it in a good way. You get a sense of non-conformity, without being able to pin it down exactly, and certainly without anything other than a feeling that you (and your psyche) are safe with them.

I’ve met them on several subsequent occasions with my partner, and each time there has been the anticipation of an adventure, followed by the knowledge that I’ve been educated. That education has been as a result of opening up to nature – off the beaten track, exploring caves, woods and stone circles – and symbolism, as we stopped off at churches. All rounded off with pub lunches. There are few better ways to enjoy a day. 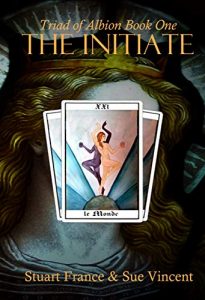 And this is relevant, because it has skewed my view of The Initiate. Not because I want to big up a book that’s poorly written. It isn’t. It’s very well written. But I know the content won’t appeal to everyone. There’s a good possibility that it wouldn’t have had the same appeal for me a few years ago. But having been out there with them, discovering new things and learning their history and the different interpretations of their meaning, the book served to remind me of those adventures, as well as opening up more concepts and ideas for me.

Because of my own experience of the book, I inevitably give it five stars. In truth, I may even have given it that if it had been less well written, but I don’t need to compromise there. Using a narrative thread and fictional versions of the authors, it tells a story, and uses that device to enlighten the reader. It’s not a unique approach, but it works especially well here, bringing everything to life and entertaining the reader as well as informing.

For readers who are interested in concepts involving nature and supernature, delving more into ley lines and the meaning of places like Stonehenge, this is an easy to read introduction. The initiate of the title is the narrator, but it could just as easily be you.

If you want to learn more about the authors, you should take a look Sue’s blog, here, and that of The Silent Eye.  The content varies, but is often thought-provoking and uplifting.