I went to the Harrogate Crime Festival this summer. It was my second time there, though the first had been little more than a recce – a long afternoon in sunshine and mixing with authors, book bloggers and crime fans generally. This year’s visit was slightly more structured and lasted a couple of days.

One of the events I went to was a dinner combined with a murder mystery, with each table hosted by an author. My table host was Caz Frear, a name unfamiliar to me at the time.

It transpired that copies of the host’s book or books should be on the table for each guest. However, for reasons I can’t really remember (and I wasn’t drinking, honest!), none of Caz’s had turned up. In their place were a selection of books from other authors, and we had the opportunity to take one (or possibly more) of those.  So the no-show meant we got some bonus books.

There were probably about ten of us at the table, and we spent most of the time chatting.  As it turned out, I was more or less opposite our host and, on a round table, that can make conversation difficult. Nevertheless, there was some banter, particularly as none of us seemed to have a clue whodunnit, and I wasn’t really paying a lot of attention to the clues being offered anyway.

Afterwards, I did get some time to talk with Caz on her own. She was good company and encouraging about my writing, while giving some insights to her own.  I haven’t met her since, but I hope we can speak again in the future. 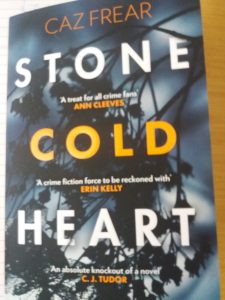 Whatever the reason for the no-show of Stone Cold Heart, we had been given an assurance that copies would be sent to us in due course. And, sure enough, a couple of weeks later this dropped through my letterbox.

I have to say it looks better in the flesh, so to speak… My photography isn’t what it should be – and I was excited at the time.

Of course, (Really? Of course?) there was the bigger thrill inside… 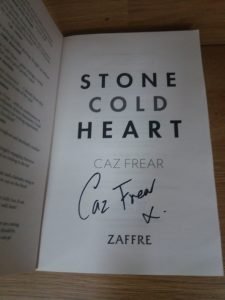 Along with so many readers and (especially) writers,  I have a TBR pile. Most of it is digital, because I prefer reading on my Kindle, but there’s also quite a stack of paperbacks building. As a result, even though I brought it higher up the pile than it warranted from a chronological point of view, it still took a few months for me to reach it.

When you’ve met an author, you do tend to have an increased curiosity about what their book is going to be like. Not just the genre and themes, but also the writing style. From our meeting at Harrogate, I’d guessed her writing would be as engaging as her conversation, but there’s always a niggling doubt. Because you liked the person, you want to like the book. And I did.

Stone Cold Heart is the second in a series, and it was clear as I read it that there would be ongoing storylines running through the books. It didn’t spoil my enjoyment, but it did make me wish I’d read Sweet Little Lies, the first in the series. I certainly will before long (TBR pile permitting).

This is a police procedural, I guess, though I didn’t feel I was tripping over procedures (that’s a good thing, by the way). The characters were the key. Told in the first person, present tense, by our protagonist, Cat Kinsella, there’s an immediacy and paciness about the story that rapidly draws you in and then drags you along. And this in spite of unfashionably long chapters. Normally, I’ll finish a chapter and look ahead to see how many pages there are in the next one. A short chapter means I think it won’t take long so I’ll just squeeze it in – and before I know it, I’ve read several. More than eight pages, and I’m hesitating. Not with this book. If it meant I fell asleep in the middle of a chapter because I was so exhausted, so be it.

Aside from Cat, we have an interesting mix of colleagues in her team, none of them representing any stereotypes I’d come across before. It was a refreshing take that added to the sense that this was genuinely something new and exciting. The rest of the cast of characters were also well-defined, easy to distinguish in spite of their number. Did I guess the bad guy (and I use that term very loosely)? Kind of, but it didn’t turn out how I expected.

I won’t say Cat Kinsella is my new favourite cop, because I’ve never had a favourite. There are plenty out there to choose from, and a lot of them have unique selling points. But I will come back to read more about her. I’m curious about book one, but I’m just as curious to see what happens with her next, especially after that ending.