It’s now two almost years since I went to an Orenda Roadshow. To be precise, I should have said the Orenda Roadshow, as it’s the only one I’ve been to. However, I am hoping they’ll do more in future, because I thoroughly enjoyed the experience.

At the time, I briefly met Matt Wesolowski, author of the Six Stories series of novels. His then new release was Beast, which I read some months later and reviewed here. The delay was caused largely by Covid, though it’s fair to say that my reading pattern can be quite haphazard at times anyway. And that’s the excuse I’m giving for not having read more of Matt’s books since then. I have, though, now read a further two, starting – perhaps belatedly – with the very first.

As is ever the case, I won’t talk much about the story. It reduces the risk of spoilers and you can find out all you need to know in advance about the book by reading the blurb on the links I’ve given at the end. Instead, I’ll take a broader view. Six Stories does, I suppose, set the scene for the concept of the series. Each novel is presented as a series of podcasts. Now this is a media I am woefully ignorant of. Nevertheless, having seen my share of documentary-style TV programmes over the years, the format is familiar enough for this to not be an obstacle to me as a reader. To be fair, I doubt it would’ve been even if I hadn’t spent too much time in front of the telly.

Some of you will already be aware of the structure, but for those who aren’t, the host of the podcast takes a look at an historical event or crime over the course of six episodes. Each of those episodes focuses on the story of a person who was involved or connected to the incident. I remember something going off between my son and one of his friends. Having listened to the different versions from each of them, I was trying to work out which was correct, but the other lad’s dad hit the nail on the head with a comment he made: ‘They’ve both got their story, and somewhere in the middle is the truth.’ In essence, this seems to be what the podcasting protagonist, Scott King, is looking for – a range of different perspectives that could lead to the truth.

As the novel starts, the podcasts are already established, but Scott King has an interesting case to look at, with a boy disappearing, only to turn up dead a year later. Against this background, the author takes the opportunity to reflect on society as a whole, while leading the reader on a merry dance that strays into a range of social issues, as well as tantalising us with the possibility of something otherworldly.

You would think the podcast format would leave the reader feeling somewhat removed from the events being spoken about by King and his interviewees, but it engages you from the off and you really do start to feel very involved, even on edge at times as the pieces of the jigsaw gradually come together.

Having already read Beast, even though well over a year had passed, I thought I was on pretty safe ground in terms of the format and how the structure would work, and yet I was thrown completely towards the end by a masterstroke. It’s possible it worked even better on me because it wasn’t my first. I suspect, though, that anyone reading it would’ve been caught out – even though the clues were all there.

Very clever writing. Very exciting and innovative. Loved it. So much so, that I jumped straight into the next one. And I’ll write about that soon. 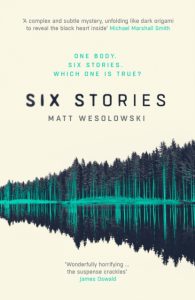 If I’ve piqued your interest and you want to know more, click on the left-hand image for the eBook, and the right hand

image for the paperback.

You’ll see I’ve used The Hive for the paperback. If you want to know why, I explain here.