In recent years, my reading habits have changed. My motives are good. I wanted to broaden the range of authors and genres I was reading – and I have. In the past, I used to find an author I liked and then read everything they had until I’d exhausted their back catalogue. There are times when I wonder if I should revert to that. One of those times came when I realised a while ago that I hadn’t got around to reading any more of the Charlie Fox books by Zoe Sharp.

I’d met Zoe at an author/blogger meet-up in Stoke. These events have been mentioned by me before, so I won’t bang on about them again – not this time, anyway.

Zoe and I got chatting and she talked about her series featuring Charlie Fox. She also dropped into the conversation that none other than Lee Child had written a Foreword for the first in the series. Frankly, I didn’t blame her. If Lee Child had simply acknowledged my presence, I’d let everyone I spoke to know about it. To have him actually endorse not only a novel but the main character for the series is something to shout about.

Perhaps inevitably, I was intrigued, so I downloaded a copy of Killer Instinct within a few days and devoured it. If you’re curious about my thoughts on that book, you can check them out here. In times gone by, having enjoyed a book like this, I’d have automatically gone on to read the next one, then the next one, and the one after that, and so on. Instead, with a wide-ranging TBR list, I diverted myself away and then away again, and further still, until I’d all but forgotten about the series.

Fortunately, I hadn’t completely forgotten, and a further reminder came when I was tidying up my Kindle library and spotted Killer Instinct. For once, I didn’t hesitate. Even though I had another book I was due to start reading, I downloaded book two in the Charlie Fox series and started reading straight away.

I was kicking myself as I got into it, because so much time had passed since I’d read the first one, and there were references to the events in that book. To 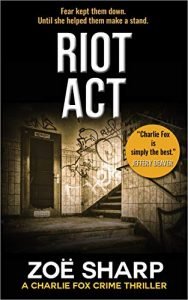 be fair, those references weren’t essential for the enjoyment of Riot Act. It was more that I wanted to have the memories clear in my mind. It’s a lesson learned.

Lee Child says that, if Jack Reacher was a woman, he’d be Charlie Fox. I have to say, I think that’s not entirely true. Reacher is a great character, and the books are, with very few exceptions, enthralling. But there’s not a lot of vulnerability there so, while we want him to win, we don’t tend to dwell on how he might be beaten. We know he won’t, we just don’t know how it’ll pan out exactly.

Charlie is a tough character, but she can also be vulnerable. She overcomes the bad guys in spite of her fears. And that, to my mind, makes her stronger than Reacher. It’s a general point to make – certainly about the character I’ve got to know so far – but I think it’s an important distinction.

So, was Riot Act as good as Killer Instinct? The passage of time and a lot of books in between makes that difficult to judge. What I do know is that I had a great time reading it. Fast paced, plenty of action, believable characters, and some twists along the way. Not the twistiest of twists, to be fair, and some of them didn’t surprise me – but that might be more a reflection of how much I read in the crime and thriller genres. Still, this isn’t a criticism. It did pretty much what it says on the tin: it entertained.

What I should do now is make sure I have the next one downloaded and ready to read very soon.

If you’ve missed this treat of a book and want a copy yourself, I’d strongly recommend getting down to your local independent bookshop. These are becoming fewer all the time, so they need our support. If there isn’t one handy or, like me, you are a complete Kindle convert, click on either of the following links: