There have been times in the past when I’ve complained about the excessive numbers of self-published books out there. This isn’t because I don’t believe Indie authors have a place in the publishing world – I’m an Indie myself. My concern has been the fact that, amongst the very excellent books published by Indies, there is a lot of crap. In a sense, that’s okay. If an author wants to put out a product that’s barely literate, has plot holes all over the place and is littered with typos, that’s up to them. The problem is that, with such a number, there’s a risk that the well-written and well-presented Indie books can be lumped together and dismissed as being of a similar quality.

My complaints are barely heard, and I recognise that, if the means to make it possible to put so much crap out there was removed, I and many other very good authors would also not have a market place for our work. So really I should keep it to myself.

With self-publishing, there are a lot of positives. For one, the variety of books is greater. With the supermarkets fast becoming the drivers of mainstream sales, the range of books publishers are looking for is diminishing. Cross-genre is talked about a lot, but it’s very risky, so we don’t see much of it except from Indies. There’s also the lack of short story collections. They’re not seen as popular and yet, in a world where people seem to have very little time, being able to dip in and out of a book and read a whole story when you’ve got a spare ten or fifteen minutes can be a God-send. These markets are being filled by Indie authors who are writing what they want, not what the corporates are telling them to.

Just recently, I had my eyes opened to another variation. 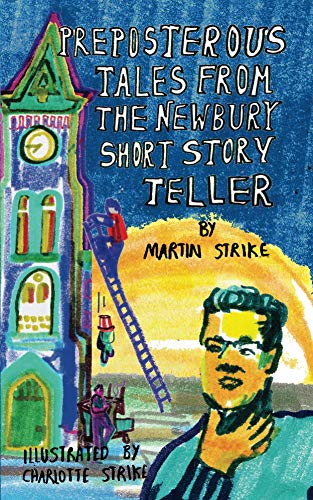 I’ve been spending a lot of time over the last few years in the Newbury area, and recently came across this book. Its appeal for me was largely the local reference, but also the blurb that refers to the book containing ‘humorous short stories set in an alternative Newbury’. The concept took me back to days when I used to write stories to entertain my schoolmates and, later, work colleagues. Those stories included familiar locations, but also parodies of people we knew. I don’t know how you would have classified those stories but, even in the early 1990s, they wouldn’t attract a mainstream publisher. The market would be far too narrow. And yet, there was a market for them. The problem was, back then, it wouldn’t have been practical – and certainly not financially viable – to publish copies.

Roll forward to now, and it is practical and viable, and it was a great pleasure to read Martin Strike’s stories with this in mind. I won’t claim this is great literature, and there were occasional typos and formatting issues. But it was a delight to experience this alternative version of a town I’ve become familiar with. Strike’s imagination isn’t constrained by conventions, as he lets loose with flights of fancy that reminded me at times of Tom Sharpe. There weren’t laugh out loud moments on every page, but they were there, and I certainly found myself chuckling repeatedly as I made my way through the book. What started out as little more than curiosity on my part, became a compulsion to grab the book and read another story when I found myself with a few minutes to spare.

So, I don’t recommend this book to you as a fantastic work that should be read by everybody. But I do hold it up as an example of the kind of book that’s possible in the modern age of publishing. And if anyone gets an urge to write about their home town, and is willing to create alternative realities for them, you will find a market for it. A small market, admittedly, but a market all the same.