I’ve said it before, and I will say it again – and, for the benefit of my children, no, it’s not because of early onset dementia – but I love getting together with other authors, book bloggers and, frankly, anyone who has a passion for books. Aside from the opportunity to chat about something you’re all enthused about, it’s introduced me to some fantastic new authors.

Three years ago, I went to an event organised by book blogger Linda Hill under the umbrella of the Book Connectors Facebook Group. I met several new authors and bloggers there, some of whom I’m delighted to consider to be friends now. Whether they feel the same is a different matter…

An author I met early on at that meeting told me she was in the midst of shifting genres and moving away from women’s fiction (never completely sure what that means) to psychological thrillers. As it happens, she and I didn’t have much contact afterwards. Indeed, I wasn’t sure she’d even remember me. Still, when Lauren North’s first psychological thriller, The Perfect Betrayal, was released last year, I downloaded a copy. It’s always interesting to read something you’ve heard a bit about from the author before it’s been completed. That said, it didn’t jump to the top of my reading list until I bumped into her again at the Harrogate Crime Festival that July (to my surprise, she had remembered me).

There’s always a risk when you’ve met an author, that you’re not going to enjoy their book. So it was something of a relief to really enjoy The Perfect Betrayal.

Lauren and I have had the occasional online contact over the last year or so, and she offered me words of encouragement at times during the latter stages of putting Carrion together. I might be wrong, but I suspect most authors have doubts about the merits of their writing, so any positive feedback is welcomed. To get it from someone who writes as well as Lauren gives you an even bigger boost.

Naturally, when her second thriller came out, I downloaded a copy of that too. A second book can be like the notorious second album in that it’s less likely to have the same impact as the first. Lauren has got around that potential hurdle, by writing in a different vein. Yes, it’s still a psychological thriller and, yes, she has used the same writing style – mainly present tense with second person narration – but the storyline is wildly different, and the pace faster. Not car chases and explosions, but there was a greater sense of urgency – and menace. I was hooked in immediately, and it didn’t let me go until I’d finished it. The red herrings are there, the culprit hiding in plain sight, but I still didn’t work out what was going on or why. So, getting back to the issue of whether the second book will be as good as the first, for me this was better – and I really enjoyed the first. I think Lauren has found her niche, and I’m looking forward to the next one already. 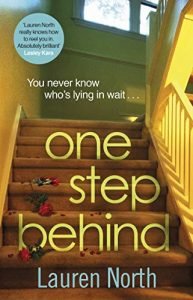 You’ll see I’ve used The Hive for the paperback. If you want to know why, I explain here.