In February last year, when we had what we can nostalgically refer to as a normal life, I attended one of the stops on the Orenda Roadshow. Indeed, I wrote about it at the time.

Whenever you go to a literary event like this, you are – unless you’re particularly narrow-minded – introduced to something new. That newness can be an author, or a book, or even a genre you hadn’t considered before.

I was already aware of Orenda but, at that point, I don’t think I’d read any of their offerings. With twelve authors given the opportunity to say a few words, there was plenty for me to be introduced to.

Will Carver was one of those authors, and his name had come up in book reviews I’d read over the previous year or so, arousing more than a degree of 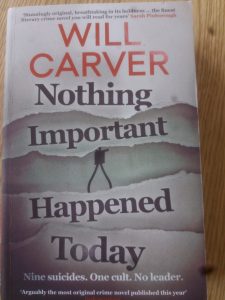 curiosity. At the time, he was focused on his novel, Nothing Important Happened Today, and I was intrigued by the concept of nine people who’ve never met before turning up to jump to their deaths off a bridge. A cult is mentioned several times on the book’s cover and blurb, so we can all start joining the dots, but be unclear as to what the final image will be.

What I hadn’t appreciated at the time was that this book was the second in a series. Well, I say series. It might be a trilogy, or it might just be some books with the same character appearing in them. In truth, at this stage, I’m not entirely sure. What I do know is that I felt inclined to read the first, Good Samaritans, before embarking on Nothing Important. You can read my review of that book here.

So, did I need to read them in order? I don’t think so, although there is a reference to a character from Good Samaritans in Nothing Important, so I think it helped a bit. More importantly, the third in the ‘series’ is out now, and there are references to it – or, rather the place in the title – in both of the others, so I have a feeling it’ll have more of an impact because of this foreshadowing. I could be wrong, of course, and will let you know my conclusions when I eventually get to it.

As for Nothing Happened, well… What a book! It’s certainly different to anything I can recall reading before. In some senses, it feels experimental and, I use that word cautiously because it would normally send me running a mile in the opposite direction. I like my novels to be fast-paced, and falling into 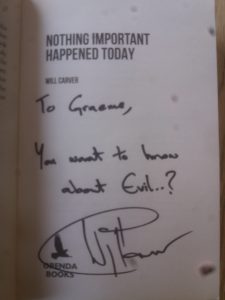 readily accessible genres. Ironic, really, when you consider my own contributions to the world of literature.

Accessibility is the key, though. And that comes from the writing, not the genre.

Something that does work to make a story accessible is effective use of dialogue. Surprisingly, there’s precious little of that here, which would normally be a turn-off for me. But Carver’s narrative is conversational, which counters the lack of dialogue very effectively. He talks directly to the reader, pretty much regardless of which point of view is in play. On the face of it, that shouldn’t work, it should jar. Perhaps with another book it would. But this is a jarring story anyway, flipping from the run-up to the events on the bridge, to the aftermath, and back again, all the while hopping from one character to another – and there are plenty of them, many remaining nameless. There are moments of pure narrative, and others of reflection – very often social commentaries that feed the senses of frustration, anger and resentment that permeate the book.

At times, I was left reeling, disoriented and having to think to get my bearings. That doesn’t normally work for me, either, but it does here. And that sense of disorientation only gets you more and more immersed, if only because you want the story to somehow make sense by the time you get to the end of it. And there were times when I did wonder if it would make sense. It did, and the ending had a degree of closure to it but, fittingly, not in as complete a way as I would normally like. Maybe that’s why I’m looking forward to visiting Hinton Hollow in Carver’s next book.

In short, ladies and gentlemen, this is (for me, anyway) a unique thriller, and I can strongly recommend it. Ideally read Good Samaritans first, but it’s not essential. Either way, I suspect you’ll be left thinking about it for days afterwards.

If you can’t get to an independent bookseller, you can try either of these links to get a copy: