I wrote recently about the first couple of books in the Charlie Fox series. At the time, I said I was considering going back to an old practice of mine, which was to pick an author and read everything of theirs I could get my hands on. Having spread myself quite thinly across authors over the last few years, that’d probably take quite a shift. Even so, I didn’t leave a year between the second Charlie Fox and the third. So maybe I’m moving gradually in the right direction.

As far as I was concerned, I was happy enough with how the previous books had gone, but Hard Knocks cranks things up considerably. First, Charlie isn’t stumbling into a situation. This time, she’s been given a job to do. Then we have the 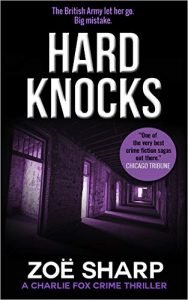 scale of the job and the calibre of the adversaries. In a sense, I’d imagine anyone reading this one and then trying the earlier books might be disappointed – but only because expectations would’ve been raised. Having a series where the characters and plot continue to up their game is surely the best way for things to go, and that’s what’s happening here. Of course, there’s scope for things to go downhill now but comments I’ve seen elsewhere suggest not.

In my experience, things are getting better, and I can strongly recommend this series if you like the following:

Zoe Sharp clearly does her research – or she’s had a lot of training in self-defence and weapons. Everything about the fight and combat scenes gives the reader a sense this could really happen.

As ever, I don’t intend to set out any details about the plot – why spoil your fun? – but the presence of a school is explained early on – and seems a pretty good indicator as to why the title was chosen. That’s as much as I’m prepared to give away.

It isn’t essential to read the earlier books first, but – as I’ve already indicated – if you’re going to start with this one, you might want to give them a miss. Personally, I’m glad I didn’t, and would recommend starting at the beginning. Charlie Fox is a character I’m looking forward to getting to know more.

If you’ve missed this treat of a book and want a copy yourself, I’d strongly recommend getting down to your local independent bookshop. These are becoming fewer all the time, so they need our support. If there isn’t one handy or, like me, you are a complete Kindle convert, click on either of the following links: