About every 5 months, a gathering occurs in a hotel in Stoke-on-Trent.  On the face of it, not the most obvious place in the world to meet, but it seems well connected in terms of roads and rail – and the hotel is just opposite the train station.

The people who show up are mix of authors and book bloggers, and are prepared to travel fair distances. At each one I’ve attended, there’s been at least one person who’s travelled up from London; I’ve met a fellow author from Gloucestershire, and a book blogger from Cornwall. Even I have driven from my home in Nottinghamshire, and my partner’s in Berkshire – so you can see it must be a worthwhile exercise.

In terms of the range of authors there, I’ve met an ex-BBC journalist turned bestseller and the author of a long-standing series championed by Lee Child, as well as a range of others who have been published by the majors, the small presses, the new digital publishers and those who’ve taken the independent route. There are even a few who’ve taken more than one route to publication – hybrid traditional/indies. So all are represented and, as an author, it’s been fascinating to listen to their experiences.

One such author is John Pye, a retired detective, who has published three books (so far) in a series of crime novels that draw on his own policing 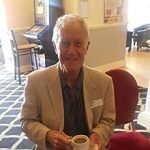 experience, as well as a short story based on real events and a memoir (of sorts) about his career in the police. I met John briefly at the first event I went to – pretty much a hello and goodbye, but had a bit more of a chat with him the second time. The conversation was enough to intrigue me about his writing, so I downloaded the first in his series, Cathedral of Lies, and waited for it to rise to the top of the TBR pile. 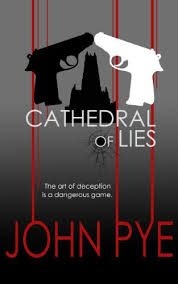 It’s probably fair to say that John’s decision to publish his books himself is a wise one, but I don’t mean that as a criticism. I suspect that, offered to agents and/or publishers it might get a contract, but it might also need a little more luck than normal (and, let’s face it, the fate of authors does seem to rely on luck as much as any other factor – even determination). The reason I say that is because, although it could be argued that the story slots into a genre, it almost creates a sub-genre in the way it plays out, chopping from one type of crime to another as it goes along. This isn’t a complaint, because I think the story works well, following a path that makes sense when you get to the end, but isn’t perhaps as clear as you’d expect it to be if it was pigeon-holed by a marketing team.

The main players all come across as credible characters. The twists, when they come, do fox you. And the additional ingredient here is the underlying story that’s based on truth. John also offers readers the chance to find out more about the real story by accessing a secure page on his website.

Some might argue that the book could have benefited from tighter editing, but it really would be a minor gripe. I enjoyed it.

The tagline is: The art of deception is a dangerous game. It’s fair to say the deceptions aren’t just in the storyline. The reader is deceived on more than one occasion, and to great effect.

For a realistic portrayal of police work, backed up with a plot that stretches the boundaries enough to add in the excitement a reader needs, I can recommend it.

And, if you’re an author or book blogger and are interested in coming along to the events in Stoke, get over to the Facebook page, where you can learn more and register to come along to the next meeting in March.