A Little Help From My Friends?

As the title says, I need your help. Just a little bit of input, though I do appreciate that you may need to give up some time. I’m gearing up for publication with Carrion and I’ve reached the part where I have to put together the dreaded blurb. When I did it with Ravens Gathering, I was shooting blind and didn’t really know where to turn for guidance. Even so, the blurb I put together seemed to go down well, incorporating a mix of a very short extract and an equally short teaser.

Carrion isn’t the same as Ravens Gathering, in the sense that it’s not the same genre (assuming anyone can actually tell 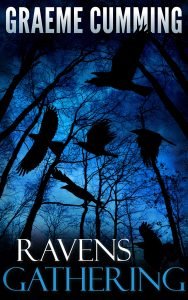 me which genres either of them are!). Nevertheless, I wanted similar imagery on the cover.

By the same token, I thought it would be good to keep the blurb in a similar style. So, the extract I’ve picked is the following:

A sheet of black filled his vision as hundreds of birds dived at the cottage, pointed beaks thrust forward. From this angle, he couldn’t see many of them striking it, but the few he did see held nothing back as they hammered into the shutter. The scale of the attack was beyond anything he’d seen or heard. And bloodied casualties littered the ground: skulls shattered, wings broken, innards spilling from them. The fact that so many of them continued with the onslaught in spite of this filled him with even more dread.

It’s hard to believe this had its origins as a bedtime story for my children, isn’t it?

So, my first question is about that extract: How does that sound to you as a potential reader? Does it draw you in? Do you feel indifferent? Even if this clearly isn’t going to be a genre you’d read, does it give you a flavour of the kind of book it is?

Okay, that’s more than one question, but most of them are simply prompts. I don’t expect an answer for each part, just a general reaction.

Moving on, beneath the extract, I have some options for the teaser (there’s probably a proper name for that – feel free to enlighten me).

When Salin invites his friends to join him on an adventure, it sounds like fun, but there’s a lot more at stake than any of them realise. Pursued by ravens as they enter new lands, it soon becomes a race against time that will test their loyalties. When countless lives depend on the success or failure of their mission, their adventure isn’t fun any more.

When Salin invites his friends to join him on an adventure, it sounds like fun. But there’s more to it than any of them realise. With strange lands come strange creatures that stand between them and their goal. And that goal is the same for someone else, a man with dark powers, who believes the prize is worth every sacrifice – especially when the sacrifices are made by others. As they race against time, loyalties are tested and the friends learn that life isn’t just a game.

The man with the beast faces the greatest challenge of his life, but the prize is worth every sacrifice – especially when the sacrifices are made by others…

With strange lands come strange creatures that stand between them and their goal. Time is running out. But who for?*

My question here is simple: Which of these do you think is the best? That said, if you think they’re all rubbish, feel free to say that. I’m well past the point of feeling sensitive about anything relating to this book!

Frankly, any feedback you give me is useful, and I am very grateful to anyone who takes the time to give any aspect of this blurb some thought. In anticipation, many thanks.