In a recent blog post, I mentioned browsing in a second hand bookshop. I’ve picked up a few books there over the last couple of years – always picked something up while I was there. One of the last purchases was an impulse buy triggered by nostalgia.

As a teenager and into my early twenties, I read a lot of Alistair MacLean’s books. Obviously there were the classics like The Guns of Navarone and Where Eagles Dare, but most of them were gripping thrillers – or so I recall nearly forty years later. It’s possible I read all of his books, but I can’t be certain. I know the last few I read, which had been new releases at the time, hadn’t grabbed me in the same way as his earlier books. They didn’t have the same depth as the older ones and I remember thinking they were starting to read more like screenplays than novels. Perhaps that was the way he was going. A lot of his books were made into movies, and I know he helped write the adaptations on some of them. Or maybe he was just getting lazy as he got older. Who knows?

In spite of my experience with those latter books, I have very happy memories of reading his work and watching the films. So when I stumbled across one while I was eating cake, I was immediately drawn to it. 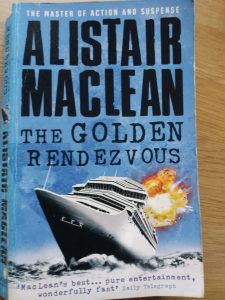 The Golden Rendezvous isn’t one of his best known books, and I’m pretty sure I haven’t seen the film. Also, although I recognised the title, as I read the blurb, it didn’t sound familiar – although the terrain did. MacLean had been in the Navy during the Second World War, so had a good working knowledge of ships and sailing them. His books are often littered with words like ‘fo’c’sle’ and ‘abaft’ – I learned a lot about ships back then just because I had to keep looking these words up.

Anyway, an Alistair MacLean I possibly hadn’t read? It wasn’t a hard decision to make.

It took me a while to get to it, but I have read it now. Had I read it before? Not sure, but that’s a good thing. It meant I wasn’t waiting for certain events to occur. Did it give me a nostalgic kick? Yes, a bit, but not as much as it might have done if I’d read, say, Ice Station Zebra or Puppet on a Chain. Was there much that was familiar about it? Obviously, there was the setting of a ship, and the ex-Navy cast of characters, but there was also a main character called John. I’ve never known any author use the same name for a central character so often – even going so far as to have a John Smith (Where Eagles Dare, if memory serves me correctly).

What did strike me as I read it was more the quality of the publication. In recent years, I’ve become increasingly conscious of errors showing up in books I’ve been reading: typos, an incorrect use of a word like ‘there/their’, even misspellings. I suppose a lot of that is down to editing, and I’ve previously assumed that the editors working for the large publishers would all be excellent at nit-picking. But it’s become increasingly obvious this isn’t the case, and the assumption I’d made was it was down to a gradual downgrading of what’s expected from so-called professionals. And when I make that comment, I am speaking generally. Whether it’s a tradesman or a solicitor, or a salesperson, my overall experience suggests standards have slipped significantly – and don’t get me started on what is laughingly referred to as customer service these days.

So, with this in mind, what surprised me the most was how many errors there were in The Golden Rendezvous. I still enjoyed it, and it wouldn’t put me off reading Alistair MacLean again if I wanted another trip down memory lane. But I’m not sure what to take from seeing so many errors in the book. Does it mean that I’ve had a rose-tinted view of how well produced books were in the past? Was it just a particularly bad print run? Should I just accept that quality control isn’t the big issue I’ve always thought it was?  And do I assume that it really isn’t all that important to the reader?

When readers have commented on the number of errors in Ravens Gathering, it’s always been to register their surprise at how few there were, so I thought that was a good thing. It means I took my time to get the book out (though I can’t entirely use that excuse for Carrion), but I was satisfied it was a product I could be proud of.

But you tell me. As readers, are there recurring issues in books that niggle you, or are you happy to look past them and immerse yourself in the story?